Longtime big leaguer Alfonso Soriano has annunced his retirement from the game, reports Hector Gomez of Dominican outlet Listin Diario (via Twitter). The 38-year-old played in parts of 16 MLB seasons, including thirteen as a full-time regular.

Soriano appeared in seven straight All Star games (2002-08). While generally subpar defensive marks hurt his overall value, Soriano was ultimately worth just under 40 fWAR in his career, though he checked in at less than 30 rWAR.

The Dominican native started and ended his career in pinstripes, joining the Yankees after an early-career stint in Japan. He was later dealt to the Rangers and then on to the Nationals, where he moved from second to the outfield, and ultimately signed an eight-year, $136MM deal with the Cubs.

That massive contract had its ups and downs, but Soriano ultimately swung an above average bat in every year except for a rough 2009. He spent the tail end of the deal back in New York after a deadline deal, delivering an excellent stretch of play late in 2013. But he struggled to get it going last year, and was ultimately cut loose by the Yanks in mid-season.

JULY 14: The Yankees have released Soriano, per the MLB.com transactions page.

New York will owe Soriano the remainder of the $5MM portion of his salary for which the team is obligated. He will be free to sign with any club (likely at a league-minimum rate), though Soriano has indicated that he would give at least some consideration to retirement.

JULY 6: Yankees manager Joe Girardi told reporters, including Mark Feinsand of the New York Daily News (on Twitter), that Alfonso Soriano has been designated for assignment.  Dropping Soriano from the roster will make room for the newly-acquired Brandon McCarthy. 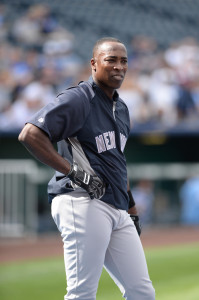 The 38-year-old is in the final year of the eight-year, $136MM contract that he signed with the Cubs in November 2006.  Soriano will earn $18MM on the year, but the Yankees are only on the hook for a portion of that with the Cubs paying the majority of the deal.  The Cubs are paying out $13MM of Soriano’s 2014 salary while the Bombers are responsible for just $5MM.

Soriano is sure to find plenty of suitors looking for outfield help, but it remains to be seen how much longer he wants to keep playing.  Soriano previously discussed retiring after the 2014 season but he also indicated that he might want to keep going through 2016.  At the time, he said he’d like to finish his career with the Bombers, but that doesn’t appear to be in the cards now.

If Soriano packs it in at the end of the season, or in a couple of years from now, he won’t be hurting for cash.  According to Baseball-Reference, Soriano has earned nearly $158MM over the course of his big league career.  In 16 seasons for the Yankees, Rangers, Nationals, and Cubs, Soriano posted a lifetime .270/.319/.500 slash line and earned seven consecutive All-Star selections from 2002 through 2008.

Alfonso Soriano will consider retirement after being designated for assignment by the Yankees, Marly Rivera of ESPN Deportes tweets. Soriano will take a week to talk with his family and think about what to do next. “This was to be expected. I talked to my lawyer about what I was going through, how I was being used, and I didn’t feel comfortable,” says Soriano. If this is it for the 38-year-old Soriano, he’ll finish his career with a .270/.319/.500 line and 412 home runs. Here are more notes from the American League.

Ubaldo Jimenez was introduced today by the Orioles, saying that he is looking forward to putting the "nightmare" of past inconsistency in the rearview mirror. Executive VP Dan Duqutte said that Jimenez was attractive to Baltimore because "he's been a proven, solid, dependable pitcher," and explained that he saw potential for new pitching coach Dave Wallace to help Jimenez maintain his form from the second half of last year. MLB.com's Britt Ghiroli has a full transcript from the presser.

Here's more from the AL East:

With the Red Sox losing the division lead for the first time in two months, here's the latest from a hotly contested American League East …

Earlier today, Major League Baseball approved a trade that sent Alfonso Soriano to the Yankees in exchange for right-hander Corey Black. The Cubs will pay $17.7MM of the remaining money on Soriano's contract, leaving the Yankees responsible for just $6.8MM. Here's some media reaction and analysis of the move…

The Cubs continued their trajectory as baseball's most active team on the trade front this morning when they officially traded Alfonso Soriano and $17.7MM to the Yankees in exchange for right-hander Corey Black. The deal saves the Cubs roughly $6.8MM and brings a power arm that was selected in the fourth round of last year's draft into their system. Here's more on Soriano and the rest of the NL Central…