Here are today's minor moves from around the league.

All three pitchers in this group will hope to win a spot alongside closer Sergio Romo and relievers Jeremy Affeldt, Javier Lopez and Santiago Casilla, each of whom is a lock for a spot in manager Bruce Bochy's relief corps.

The Braves have activated the recently acquired Scott Downs and designated right-hander Kameron Loe for assignment, the team announced on Twitter.

Loe, 31, signed a minor league contract with Atlanta back in May after being designated for assignment by the Cubs and Mariners. He threw 42 1/3 innings of 3.19 ERA ball at Triple-A Gwinnett before being called up to the Major League team last week. Loe hurled one scoreless inning before allowing three runs in 1 2/3 frames on July 25. In 17 2/3 innings for the Mariners, Cubs and Braves this season, Loe has an 8.15 ERA with 10 strikeouts against seven walks (two intentional).

The Braves have signed right-hander Kameron Loe to a minor league deal, Trade Deadliner's Chris Cotillo reports (Twitter link).  Loe was released by the Cubs yesterday after being designated for assignment earlier this week.

Loe has a 7.80 ERA in 15 combined innings with the Mariners and Cubs in 2013.  It has been a busy season for the nine-year veteran, as Loe has already been designated for assignment and changed teams twice within a month.  Loe spent the previous three seasons in Milwaukee, where he posted a 3.67 ERA, 7.3 K/9 rate and a 3.18 K/BB ratio in 195 relief appearances for the Brewers.

Right-hander Kameron Loe was granted his release by the Cubs and is now a free agent, according to Jesse Rogers of ESPN Chicago (on Twitter). Loe was designated for assignment by the Cubs earlier in the week.

So far in 2013, Loe has given up an unthinkable nine home runs in just 15 innings of work. Nearly half of the fly-balls given up by Loe this season have resulted in homers. According to Fangraphs, Loe's 47.4 percent HR/FB ratio is the third-highest single-season mark by a pitcher with at least 10 innings since the stat began being tracked in 2002. Oddly, Loe was still able to maintain his typically stellar ground-ball rate by posting a mark of 50 percent in that category.

Sweeney was signed to a minor league deal by the Cubs on April 2nd after being released by the Red Sox.  The 28-year-old hit .337/.396/.627 in 91 Triple-A plate appearances to earn a trip back to the Show.   Sweeney knows Chicago well.  He was drafted by the White Sox in the second round ten years ago, and began his career with the South Siders before being traded to Oakland in the 2008 Nick Swisher/Gio Gonzalez trade.

The Cubs announced that they have claimed right-hander Kameron Loe off of waivers from the Mariners. Seattle designated Loe for assignment after acquiring Aaron Harang from the Rockies on Thursday. The Cubs made room for Loe on the 40-man roster by placing Steve Clevenger on the 60-day disabled list with a strained left oblique suffered yesterday.

Loe signed a minor league deal with the Mariners in February but the 31-year-old allowed six home runs in 6 2/3 innings of work (four games) this season. The 27-year-old Clevenger meanwhile has appeared in eight games for the Cubs, primarily as a pinch-hitter, with one hit in eight at-bats. 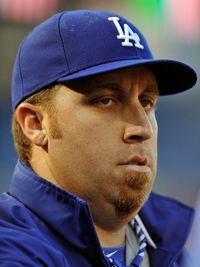 The Rockies acquired Harang and $4.25MM from the Dodgers for catcher Ramon Hernandez last week, and then immediately designated Harang for assignment.  Harang earns $7MM this year and has a $2MM buyout after the season, and the Rockies will send money to the Mariners to cover most of that.  The Rockies will save more than $2MM with the series of trades, tweets Ken Rosenthal of FOX Sports.

Loe, 31, signed a minor league deal with the Mariners in February but allowed six home runs in 6 2/3 innings to start his season.

The Mariners and Rockies last matched up on a trade in December 2010, when Colorado acquired Jose Lopez for Chaz Roe.  More recently, a pitcher jumped from the Mariners to the Rockies when Jon Garland exercised his opt-out clause to leave the Mariners in March and signed with Colorado.

As has been previously discussed on MLBTR, Major League Baseball's new collective bargaining agreement contains a provision that allows certain free agents who are signed to minor league contracts to receive a $100K retention bonus if they are not on the team's 25-man roster or the Major League disabled list five days prior to the season.