Alcantara, 26, had appeared in each of the past three MLB campaigns. He was cut loose by the Tigers at the end of the 2019 season and had not yet signed on with another organization.

While he gets a good number of groundballs with his 94 mph sinker and carries a decent lifetime 10.5% swinging-strike rate (about average for a starter), Alcantara hasn’t found consistent success in the majors. Through eighty total frames, he carries a 4.28 ERA with 5.6 K/9 and 2.8 BB/9 along with a 52.3% groundball rate.

It was never likely Alcantara would land a major league deal, but he was also an obvious candidate to get a non-roster shot. No doubt he’ll still command another opportunity, though he’ll need to serve his suspension upon joining a new team.

Alcantara posted a 4.85 ERA over 42 2/3 innings for Detroit in 2019, with an impressive 53.6% grounder rate that was undermined by a lack of missed bats (5.06 K/9) and a difficulty in keeping the ball in the yard (17.8% HR/FB rate) when he did allow a fly ball.  Alcantara’s minor league numbers reveal more strikeouts and more walks allowed than he delivered at the MLB level, though his improved control seems to be resulting in more contact and more mistakes being taken out of the park.

Hicks seemed like an intriguing building block for the Tigers as a player who could at least split time between catching and first base, though while his bat played well for a catcher, a decrease in time behind the plate (Hicks played exclusively at first base in 2019) lessened his effectiveness.  Hicks only hit .210/.240/.379 over 333 plate appearances last season, a big step down from his more respectable .262/.317/.416 slash line over 502 PA in 2017-18.

MLBTR’s arbitration projections put Hicks in line for a $1.7MM salary in 2020, which the Tigers will now sidestep.  Between the projected costs for Hicks, Stumpf, and Hardy, Detroit’s projected arbitration costs have already dropped by a cumulative $4.3MM.

The Tigers announced a series of roster moves, including the news that infielder Dixon Machado has been designated for assignment.  The 40-man roster spot will be filled by right-hander Victor Alcantara, whose contract will be selected from Triple-A before tomorrow’s game.  Right-hander Warwick Saupold has also been optioned to Triple-A, with infielder Ronny Rodriguez headed up to the big league club.

Machado began the season as Detroit’s everyday second baseman, as the rebuilding team sought to give the 26-year-old a long look at the position with Ian Kinsler dealt to the Angels.  He produced passable defensive grades but the bigger issue was Machado’s lack of hitting, as he managed only a .206/.263/.290 slash line and one home run over 233 plate appearances.  The bat has never really been Machado’s calling card (he had just a .640 career OPS over 3329 PA in the minors), though the Tigers couldn’t ignore such a dire performance for much longer, especially with Niko Goodrum increasingly taking over regular duty at second base.

If the out-of-options Machado isn’t claimed or traded during his DFA period, he could still leave the organization as a free agent, as MLive.com’s Evan Woodbury tweets.  Machado was outrighted off the roster back in 2013, so he would have the option of choosing free agency rather than accept an outright assignment to Triple-A.

Alcantara will join the Tigers’ Major League roster for the first time this season.  The 25-year-old righty made his big league debut in 2017, posting an 8.59 ERA over 7 1/3 relief innings out of Detroit’s bullpen.  He was outrighted off the 40-man in the offseason, though regained some stature within the organization with a 2.68 ERA, 8.4 K/9, and a 7.33 K/BB rate over 47 innings at Triple-A Toledo this season.

Right-hander Victor Alcantara has been outrighted after clearing waivers, as Anthony Fenech of the Detroit Free Press reported on Twitter. That leaves the team with an open 40-man spot in advance of the Rule 5 draft later this week.

The 24-year-old Alcantara, who came to the organization in the Cameron Maybin swap, struggled in his first, limited MLB action in 2017. Alcantara spent most of the year in the upper minors, where he was utilized mostly as a reliever after spending the bulk of his career to that point as a starter. Over 74 2/3 innings at Double-A and Triple-A, he posted a 3.62 ERA with 8.8 K/9 and 5.5 BB/9. 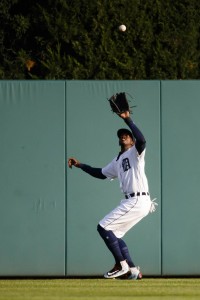