Free agent left-hander Chris Capuano seeks a multiyear deal this offseason and, as improbable as it would have seemed two years ago, he may actually get one. The 33-year-old has recovered from Tommy John surgery — his second such operation — and two lost seasons to become a solid back-of-the-rotation option. 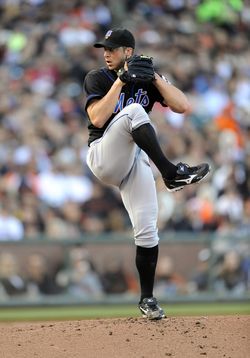 His unsightly ERA may be deceptive, since xFIP (3.67) and SIERA (3.60) suggest he pitched better. Capuano placed 33rd on MLBTR’s list of top free agents and you can make the argument that he’s one of the top ten starters on the open market.

The Mets appear to prefer one-year bargains, but Capuano’s representatives at Moye Sports Associates are likely to hear from many other interested teams. At least a dozen teams will likely have interest in filling out the back of their rotations with arms such as Capuano, Bruce Chen and Freddy Garcia. For example, the Red Sox had some interest in Capuano at the end of the season and their need for pitching still exists.

Capuano, an unranked free agent, signed for $1.5MM plus incentives last offseason. After approaching the 200-inning plateau, he has earned a raise and a shot at a multiyear deal. Kevin Correia signed a two-year deal worth $8MM last offseason and I expect a similar contract for Capuano before Spring Training 2012.