The Cardinals and Yadier Molina are closing in on a five-year deal in the $70-75MM range. Here are more updates on extension talks around the league…

6:47pm: ESPN New York's Adam Rubin hears that it is "very unlikely" the Mets will add Rodriguez because they think Rob Johnson or Mike Nickeas will hit enough as Josh Thole's backup (all Twitter links). A second source said definitively: "We are not bringing Ivan here."

5:48pm: The Mets haven’t ruled out signing free agent catcher Ivan Rodriguez, Mike Puma of the New York Post tweets. However, they want to be sure Johan Santana is healthy before spending the $2MM or so remaining in their budget. If the left-hander gets injured, the Mets would allocate their remaining funds toward a starting pitcher.

A Mets official spoke with Rodriguez as recently as ten days ago, telling the veteran backstop to “stay in shape” in case anything happens. The 21-year veteran has fielded a few inquiries this offseason, including one from the Diamondbacks, but he says it’s been a tough market for veteran players such as himself. Rodriguez, 40, posted a .218/.281/.323 line in 137 plate appearances last year, preventing 13 of the 25 stolen base attempts against him.

The latest on the Rangers via GM Jon Daniels and assistant GM Thad Levine:

The Yankees and Russell Martin have agreed to table extension talks until the season ends, agent Matt Colleran confirmed to Joel Sherman of the New York Post. By that point, Martin will be on the brink of free agency and the market for catchers will likely be better-established.

Yadier Molina and the Cardinals are nearing a five-year contract in the $70-75MM range, and the near-deal “gives you something to point to now,” Colleran said. When the Yankees discussed a possible extension with Martin earlier in the offseason, they reportedly offered a three-year deal in the $20MM range. Though Martin figures to sign for less than $14-15MM per season, he will benefit from Molina’s deal (as will Mike Napoli and Miguel Montero).

Martin would like to sign long-term with the Yankees, who were impressed with his performance in 2011. The Yankees are “obsessed” with lowering their payroll below $189MM by 2014 for luxury tax purposes, Sherman writes. He suggests Martin could sign for $40MM over four years next offseason.

END_OF_DOCUMENT_TOKEN_TO_BE_REPLACED 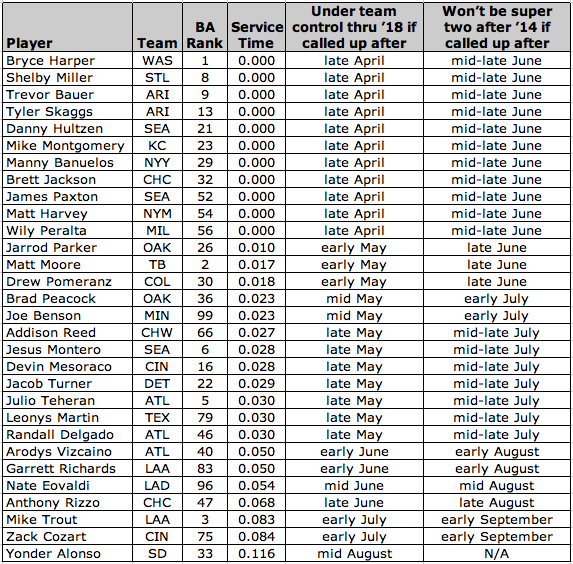 The Braves took their offseason inactivity to a new level this winter.

The Braves made the first trade of the offseason, shipping Lowe to the Indians in the name of saving $5MM.  Facing a relatively large arbitration tab, GM Frank Wren had limited flexibility even after that salary dump and a payroll increase.  He entertained trade offers for veterans Jair Jurrjens and Martin Prado, but ultimately held onto both players. 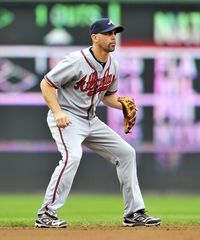 There was a case for offering Gonzalez arbitration, but perhaps the Braves didn't feel a possible supplemental draft pick was worth risking a potential $4MM salary for a player they no longer wanted as their everyday shortstop.  Gonzalez signed with the Brewers, and Wren chose Wilson (pictured) as his "traditional backup shortstop" behind rookie Tyler Pastornicky.  As Bill Ballew of Baseball America points out, Wren has had success aggressively using rookies as regulars before with Freddie Freeman and Jason Heyward.  Pastornicky is not that level of prospect, though, and I wonder if a bid for Marco Scutaro or Jamey Carroll would have offered more security than Wilson (who, incidentally, will start the season on the DL).

The league's best bullpen included 316 innings from Jonny Venters, Craig Kimbrel, Eric O'Flaherty, and Cristhian Martinez in 2011, and in October Wren cited Martinez, Anthony Varvaro, and Kris Medlen as reasons bullpen depth was not a concern.  The Braves lost veterans Linebrink and Sherrill to free agency, after the duo provided 90 1/3 innings of 3.39 ball.  A lot of teams would have spent a few million dollars to replace them, but I agree that the Braves still have plenty of bullpen depth.

The majority of the Braves' offseason MLBTR archives involved Prado and Jurrjens trade rumors.  Reportedly, the asking price was huge: highly-regarded Rockies third base prospect Nolan Arenado in a deal involving Prado, and a Zack Greinke-like deal for Jurrjens.  If good health allows Prado to return to his 2008-10 offensive levels, keeping him rather than signing Josh Willingham, Michael Cuddyer, or Cody Ross was the right move.  The Braves poked around on trade targets Seth Smith and Adam Jones but couldn't find common ground.  I think the Jones discussions solidified that Jurrjens' stock is down as well, as last year's misleading 2.96 ERA can't disguise the fact that he started only 43 games over 2010-11.

The Braves were obviously down on Lowe after his late-season struggles.  They felt they needed the $5MM more than Lowe's innings, even though Tim Hudson is the lone remaining starter who exceeded 152 MLB innings in 2011.  Now we know Hudson will miss the first month of the season.  Somehow, the Braves' rotation still looks above-average, with Tommy Hanson, Brandon Beachy, Jurrjens, and some combination of Mike Minor, Randall Delgado, and Julio Teheran.  However, I don't see a workhorse in that group, so the bullpen may be taxed again as the season wears on.

Wren has said this team deserves another chance, despite last year's collapse down the stretch.  They've still got several of the game's best young pitchers and some All-Star caliber bats, so the team should be in contention even if they're not the preseason NL East favorite.

It's time to start preparing for fantasy baseball drafts, at the expense of your friends and loved ones.  Instead of throwing down $8 on a magazine that was written in December, why not check out the latest at our sister site RotoAuthority?

The Orioles signed righty Josh Banks to a minor league deal, tweets Roch Kubatko of MASNSports.com.  He notes that the Yankees and Dodgers were also interested in the 29-year-old, who will start at minor league camp.

Former slugger Gary Sheffield has apparently become an agent, because it was revealed this morning that he represents Banks.  Banks hails from Severna Park, Maryland, and Sheffield reached out to arrange a tryout with the Orioles, according to MLB.com's Brittany Ghiroli.  Sheffield also represents Pirates reliever Jason Grilli, reported Ghiroli.

Unfortunately, Athletics third baseman Scott Sizemore is out for the 2012 season with a torn anterior cruciate ligament.  Assistant GM David Forst addressed reporters today, explaining that Josh Donaldson will get the first look as his potential replacement.  The team will look both internally and externally for other options, though Forst noted that spring training is generally not a time for trading.

Donaldson, 26, is a catcher by trade, but he's played the infield corners and a touch of outfield in the minors.  According to Susan Slusser of the San Francisco Chronicle, "The A's liked the work Donaldson did at third base the final month of last season at Triple-A Sacramento and at winter ball in the Dominican Republic, and they believe he's improved enough defensively to handle the position at the big-league level. In addition, some think Donaldson will hit better when he's not catching."  The A's have a few other internal candidates, but a little outside help is worth considering.

Slusser wrote Sunday the A's would be likely to have interest in Alberto Callaspo of the division-rival Angels, if they could get him without parting with a significant prospect.  Our free agent tracker shows a few minor league deal options, such as Miguel Tejada and Wes Helms.  Where could the A's look if they are to get more aggressive on the trade market this summer?

Baltimore's Mark Reynolds could become available, though he's not known for his defense and has limited no-trade protection.  Chone Figgins is another midseason name to consider, but only if he gets off to a strong start and the Mariners assume most of the money remaining on his contract.  Same goes for Brandon Inge of the Tigers.  I could see the Rockies moving Casey Blake, should Nolan Arenado force the issue in a few months.  Projected as a short-side platoon partner at the infield corners for the Pirates, Casey McGehee might prefer a chance to play regularly again.

The A's are in a weird spot, as Sizemore seemed something of a stopgap himself.  Most likely if they bring in anyone this spring, it'll be a free agent on a minor league deal, or a trade for someone who signed one, such as Blake, Brooks Conrad, Jose Lopez, Mark Teahen, or Brandon Wood.  In that case, guys like Donaldson and Stephen Parker might as well get looks.

The Astros named Brett Myers their closer, manager Brad Mills told reporters this morning.  According to Alyson Footer, GM Jeff Luhnow brought the idea to Mills, who liked it and approached Myers.  Myers' $10MM vesting option for 2013 was reworked to reflect the role change, tweets Zachary Levine of the Houston Chronicle.

Luhnow traded incumbent closer Mark Melancon to the Red Sox in December, and Myers makes for a viable replacement.  Myers spent time in the role with the '07 Phillies, but he told MLB.com's Brian McTaggart, "I wouldn't accept it if I didn't think I could do it, but it's going to be a challenge for me because it's something different.  It's like a position change for me. It's like taking a first baseman and moving him to third. I'm going to have to work a little harder to get my arm in shape to throw 20 or 25 pitches a night. Hopefully, it will be good for the team and good for the organization."

Luhnow explained the move, saying, "We feel like we’re in pretty good shape [in the rotation] and have some choices. We felt like were a little exposed in the bullpen, and having a guy who’s been successful in that role and who’s got the mentality and stuff to do well takes pressure of Brandon Lyon coming off an injury and doesn’t put pressure on young kids like David Carpenter and Wilton Lopez."  I feel that while the Astros have a number of options for their last two rotation spots, this move still weakens the team overall.

The decision probably isn't all that great for Myers' trade value, as he'd been able to toss 439 2/3 innings over the past two seasons.  He's owed $11MM this year, and if the '13 option doesn't vest it will come with a $3MM buyout.

As we gear up for fantasy baseball season, be sure to follow our @closernews account on Twitter.  Over 9,200 followers are already on board, getting instant news on the 30 closer situations to ensure dominance in the saves category.  You can also check out our closer depth chart at RotoAuthority.