The Rangers have announced the dimensions for Globe Life Field via a press release posted to Twitter by Sam Blum of the Dallas Morning News. The 2020 season will mark the Rangers’ first in their new ballpark in Arlington after 26 seasons in the stadium original known, aptly, as the Ballpark In Arlington. Globe Life Field is set to open officially on March 23, 2020, just across the street from Globe Life Park.

The distances of the wall from home plate has been orchestrated with a rather inventive flourish to honor players whose numbers have been retired by the Rangers. The new park will be 329 feet down the left field line, to honor Adrian Beltre’s #29, 407 feet to straight away centerfield, in honor of Ivan Rodriguez’s #7, 410 feet to the deepest parts of the ballpark just to the left and right of dead center, in honor of Michael Young’s #10, and 326 feet down the right field line, in honor of Johnny Oates’ #26, who managed the club from 1995 to 2001.

Franchise history is also immortalized in the power alleys: 372 feet to the left field power alley to commemorate the team’s first year in Arlington (1972) and 374 feet to the right field power alley to commemorate The Turnaround Gang, the 1974 squad that went from 59 to 84 wins to record the first winning season in Rangers’ team history. The walls will be eight feel tall from foul pole to foul pole. Not to be forgotten, there will also be a distance marker 334 feet from home plate in left to honor Nolan Ryan’s #34.

In a recent piece from the Dallas Morning News, Evan Grant quotes Rob Matwick, the Rangers’ VP of Business Operations, as saying, “We think the park is going to play fair. We have taken the design and done testing in wind tunnels. But in fairness, until we start playing games, we won’t really know.”

There is certainly the possibility that the park will play differently depending on if the dome is open or closed, as well. The 5.5 acre retractable roof was closed for the first time yesterday morning. Work will continue for the next few months in preparation for the official opening just before Opening Day.

Tim Raines, Jeff Bagwell and Ivan Rodriguez have been elected to the Major League Baseball Hall of Fame, per an announcement from the Baseball Writers Association of America (full balloting available at that link). Both Raines and Bagwell had to wait for their enshrinement among baseball’s all-time elite, as Raines was on his 10th (and final) ballot this year, while Bagwell was on his seventh. Rodriguez, meanwhile, will receive the call to Cooperstown as a first-ballot Hall of Famer — just the second catcher to ever receive that honor (joining the great Johnny Bench).

Raines, now 57, spent the majority of his career with the Expos, suiting up for Montreal in 13 of the 23 seasons during which he played a Major League game. One of baseball’s greatest leadoff hitters during his peak, the former fifth-round pick played in 2502 Major League games and tallied 10,359 plate appearances while batting .294/.385/.425 with 170 home runs, 808 stolen bases, 1571 runs scored and 980 runs batted in. Not only did Raines rack up stolen bases in bunches during his career — including four straight league-leading seasons of 71+ steals in 1981-84 — he was also extremely efficient in doing so, as evidenced by a career 84.6 percent success rate. The seven-time All-Star spent the bulk of his career playing left field, though he did have cameos in center field and at second base over the life of his illustrious career. Baseball-Reference pegs that career at 68.4 wins above replacement, while Fangraphs credits him for 66.4 WAR.

Now 48 years of age, Bagwell spent his entire 15-year career in an Astros uniform and is widely regarded as one of the greatest Astros of all time (if not the greatest). In 2150 games and 9431 plate appearances, Bagwell batted .297/.408/.540 with 449 home runs, 202 stolen bases, 1529 RBIs and 1517 runs scored. Bagwell was a near-unanimous (one vote shy) National League Rookie of the Year in 1991 when he batted .294/.387/.437 as a 23-year-old, and he was the unanimous NL MVP in a strike-shortened 1994 season that saw him hit .368/.451/.750 with 39 homers and a league-leading 116 RBIs. Bagwell earned four All-Star nods, a Gold Glove at first base and three Silver Sluggers in his brilliant career. In addition to his ’94 MVP win, he finished as second to future Hall of Famer Chipper Jones in 1999 and third behind MVP Larry Walker (who many believe should be in Cooperstown) and runner-up Mike Piazza (another Hall of Famer) in 1997. Baseball-Reference credits Bagwell with 79.6 WAR in his career, while Fangraphs is ever so slightly more bullish at 80.2 WAR.

Rodriguez, 45, spent parts of 20 seasons in the Major Leagues and finished his career as one of the most decorated catchers of all-time. A 14-time All-Star, “Pudge” also won the American League MVP Award in 1999 and was the recipient of an incredible 13 Gold Glove Awards, to say nothing of seven Silver Slugger Awards. In 10,270 career trips to the plate, Rodriguez batted .296/.334/.464 with 311 home runs, 1332 runs batted in and 1354 runs scored. He also prevented an incredible 46 percent of stolen base attempts against him in his career (661 of 1447), leading the league in caught-stealing percentage on nine occasions (including a ridiculous 60 percent mark in 2001).

Falling painfully shy of the 75 percent of votes needed to be immortalized in Cooperstown was Padres legend Trevor Hoffman, who fell just five votes and one percent short of joining this trio. Hoffman’s near-election came in just his second time on the ballot, which suggests that he’ll likely be bestowed with this honor in the years to come. Vladimir Guerrero, too, falls just shy at 71.7 percent in his first year on the ballot, though it seems exceptionally likely that he’ll eventually join Hoffman in the Hall.

Edgar Martinez (58.6 percent), Roger Clemens (54.1 percent), Barry Bonds (53.8 percent) and Mike Mussina (51.8 percent) round out the players to receive more than 50 percent of the vote from the BBWAA. Meanwhile, legendary closer Lee Smith will fall well shy (34.2 percent) of election in what was his 15th and final time on the Hall of Fame ballot.

12:13am: Rodriguez does not seem to be a candidate, CBS Sports’ Jon Heyman tweets.

12:11am: There are industry whispers about former star catcher Ivan Rodriguez as a potential candidate for the Marlins managerial job, MLB.com’s Joe Frisaro tweets. The Marlins, of course, fired another former catcher, Mike Redmond, from the job on Sunday and will announce a replacement Monday morning.

The idea of Rodriguez as a candidate is consistent with Jon Heyman of CBS Sports’ recent tweet that the job will go to an “outside the box” candidate. Rodriguez retired in 2012 and is now a special assistant to Rangers GM Jon Daniels. He has no managerial experience, although former catchers like Mike Matheny and Brad Ausmus have won managerial jobs in recent seasons despite similarly thin resumés as coaches.

Rodriguez was widely credited for his veteran leadership for the Marlins in 2003, when they won their second World Series, although that was his only season with the team. He spent the rest of his 21-year big-league career with the Rangers, Tigers, Yankees, Astros and Nationals, generally putting up strong offensive numbers while winning ample praise for his work behind the plate (and particularly his arm). He holds the MLB record for games caught, with 2,427.

The latest notes from the AL Central…

Ivan Rodriguez has been hired by the Rangers as a special assistant to the general manager, the team announced today.  "Pudge" spent 13 of his 20 Major League seasons as a Ranger and will now serve the organization as a scout, organizational instructor and ambassador.  Here are some more items from around the AL West…

As if the Phillies didn't already have enough stars on the disabled list, Hunter Pence missed Monday's game due to a shoulder injury suffered diving for a ball Sunday against the Padres.  The extent of the injury is yet unknown and Pence is considered day-to-day for the time being.

Some news from Monday in the Major Leagues…

No team in baseball has scored more runs or allowed fewer runs than the Rangers, so it's no wonder they're 13-3. Here are some Rangers-related links as they prepare to host the Yankees… 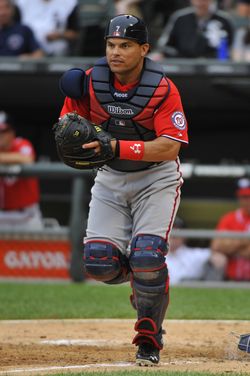 Links for Thursday, as the first full day of the regular season wraps up…