The Padres and catcher Nick Hundley agreed to terms on a three-year extension, the team announced. The deal covers the 2012-14 seasons and includes a club option for 2015. Athletes First represents Hundley, who drew praise from his new GM.

“Nick has developed into one of our club’s core players,” Josh Byrnes said. “He impacts the game on both offense and defense and has evolved into a leader on the field and in the clubhouse.” 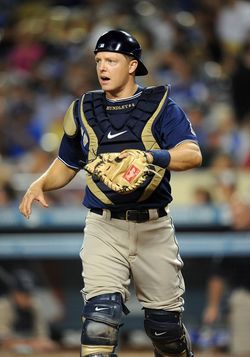 Hundley had agreed to a one-year, $2MM salary via arbitration this offseason and was on track for free agency following the 2014 season. This means San Diego extends its control of Hundley by up to one season with today's agreement. Hundley will earn $2MM in 2012, $3MM in 2013 and $4MM in 2014, MLB.com's Corey Brock reports (Twitter links). The club option is worth $5MM and doesn't include a buyout, so it's a three-year, $9MM deal.

As Mike Axisa pointed out when talks heated up over the weekend, catchers such as Kurt Suzuki (four years, $16.25MM), Yadier Molina (four years, $15.5MM), Carlos Ruiz (three years, $8.85MM) and Chris Iannetta (three years, $8.3MM) signed extensions when they had between three and four years of service time. Iannetta and Ruiz were likely comparables for Hundley's deal.