The Cubs have traded left-hander Paul Maholm, outfielder Reed Johnson and cash considerations to the Braves in a four-player trade that provides Atlanta with reinforcements for the season's final two months and bolsters Chicago's minor league system. The Cubs obtain right-handers Jaye Chapman and Arodys Vizcaino in the trade, which the teams have announced. 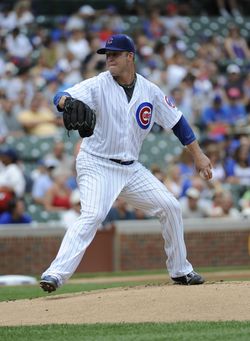 Johnson, 35, has a .307/.361/.452 batting line in 180 plate appearances this year. The right-handed hitter has played all three outfield positions for the Cubs and owns a career .313/.370/.469 line against left-handed pitching. He's signed to a one-year, $1.15MM contract and will hit free agency after the season. Four teams made offers for Johnson today, including the Pirates and Tigers, according to Bruce Levine of ESPNChicago.com.

Maholm joins a Braves rotation that includes Tim Hudson, Tommy Hanson, Mike Minor, Ben Sheets and, as of tomorrow, Kris Medlen. The Braves nearly traded for Ryan Dempster this month, but the sides don't appear to have obtained the right-hander's permission.

Geovany Soto has been traded to the Rangers in a separate move.