Earlier today, we learned the Cardinals’ Adam Wainwright could miss the rest of the season after suffering an Achilles injury in last night’s game against the Brewers. GM John Mozeliak has said he will wait to determine Wainwright’s status until the right-hander has been examined by team doctors tomorrow. However, that hasn’t stopped the speculation from bubbling as to how the Cardinals will replace their ace.

Here’s the latest on those rumors and the rest of the news from the National League:

Lefty Paul Maholm has a “standing offer” at Triple-A with the Reds, tweets Jon Fay of the Cincinnati Enquirer. At present, however, Maholm is looking to secure a big league deal if possible. He was released yesterday by Cincinnati.

The Reds announced that they have released veteran left-hander Paul Maholm (Twitter link). Cincinnati told Maholm a week ago that he wouldn’t earn a spot in the team’s rotation, but at the time, Maholm was still uncertain about exercising the out clause in his contract.

Maholm, 32, spent last season with the Dodgers, working to a 4.84 ERA with 4.3 K/9 and 3.6 BB/9 in 70 2/3 innings between their rotation and the bullpen. Though he’s struggled over the past two seasons, Maholm was a more than serviceable rotation arm for the Pirates, Cubs and Braves from 2011-12, recording 351 1/3 innings of 3.66 ERA ball in that time. He also pitched well this spring, yielding only three runs in 12 1/3 innings, although his 5-to-3 K/BB ratio in that time leaves something to be desired.

The Reds’ rotation figures to include Johnny Cueto, Homer Bailey, Mike Leake, Anthony DeSclafani and a yet-undetermined fifth starter, with Raisel Iglesias and Jason Marquis possibly still in the mix. Cincinnati made the surprising decision to shift Tony Cingrani to the bullpen earlier this spring.

If the Cubs keep Kris Bryant at Triple-A to begin the season, FOX Sports’ Ken Rosenthal believes the MLBPA should file a grievance as a matter of principle.  It would be a mostly symbolic gesture (“The case law overwhelmingly favors the clubs,” according to one of Rosenthal’s sources) yet it would indicate that the players’ union is serious about addressing this service-time loophole when the new collective bargaining agreement is negotiated next year.  It would also be a big-picture show of strength by the union, as some player agents feel that the MLBPA has a bit too lenient on some recent issues.

Cubs righty Jacob Turner will likely not return to action for another spring game, MLB.com’s Carrie Muskat reports, but medical review after he experienced elbow discomfort revealed no ligament damage. “I’m just going to see how it feels,” said Turner. “The plan is four to six weeks of not throwing, and then go off how I feel.” Given his lack of options, I would expect the club to bring him along quite slowly — possibly utilizing a 60-day DL stay to free a roster spot.

Meanwhile, here are some roster situations percolating elsewhere in the National League:

The Reds have announced, via Twitter, they have signed left-hander Paul Maholm, which was first reported by CBSSports.com’s Jon Heyman. It is a minor league deal with an invitation to Spring Training, tweets C. Trent Rosecrans of the Cincinnati Enquirer. Maholm is represented by Bo McKinnis. No financial terms have been announced.

Maholm, who pitched for the Dodgers last year after signing a one-year, $1.5MM contract, saw his season cut short when he tore the ACL in his right knee while covering first base during a game in August. The 32-year-old told FOX Sports’ Jon Paul Morosi recently his right knee is doing “great” and he has been undergoing his normal offseason regimen since December (Twitter link).

Maholm did pitch in 30 games for the Dodgers (eight starts and 22 relief appearances) posting an overall line of 4.84 ERA, a career-worst 4.3 K/9, and 3.6 BB/9 over 70 2/3 innings. Reds GM Walt Jocketty says Maholm will compete for a spot in the starting rotation, according to MLB.com’s Mark Sheldon. If Maholm impresses, he could land in the bullpen and be utilized, as he was by the Dodgers, in a swingman role. 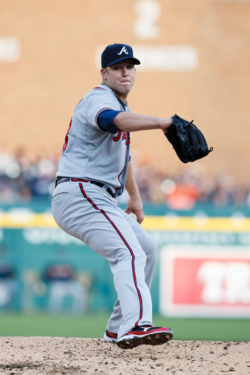 If things went differently, Diamondbacks manager Kirk Gibson could have found himself on the pages of Pro Football Rumors rather than MLBTR.  Gibson was a standout wide receiver at Michigan State in 1977 and in an effort to increase his leverage with the NFL, he returned to the baseball diamond for the first time since high school, writes Dan Bickley of the Arizona Republic.  When the Tigers drafted Gibson with the 12th pick in the 1978 draft, they allowed him to finish out his senior season but made him give up on the NFL.  Here's more out of the NL West..

10:08am: Judging from events in the Dodgers' clubhouse today, the team appears likely to sign starting pitcher Paul Maholm. Maholm currently has a locker, Dylan Hernandez of the Los Angeles Times notes (via Twitter). Hernandez also tweets that Maholm is in the clubhouse, apparently to take a physical. The Dodgers were reportedly a candidate to sign Bronson Arroyo, so Arroyo's recent decision to sign with the Diamondbacks may have led the Dodgers to pursue Maholm as an alternative.

Maholm, 31, posted a 4.41 ERA with 6.2 K/9 and 2.8 BB/9 in 153 innings with the Braves last season. He made $6.5MM after the Braves picked up an option on the one-year deal he originally signed with the Cubs prior to the 2012 season. The lefty is one of many starting pitchers remaining on the free-agent market, joining names like Chris Capuano and Suk-Min Yoon in a tier below top options A.J. Burnett, Ubaldo Jimenez and Ervin Santana. MLBTR's Tim Dierkes projected that Maholm would get a one-year, $7MM deal this offseason.

Draft pick compensation is hanging over the market for several prominent, unsigned free agents — namely, Ervin Santana, Ubaldo Jimenez, Stephen Drew, Nelson Cruz, and Kendrys Morales. Ken Rosenthal of FOX Sports looks at the draft pick situations of some of the clubs that might consider adding one of those names. As we finish a quiet Monday, let's round up some notes on free agent rumors from around the league: