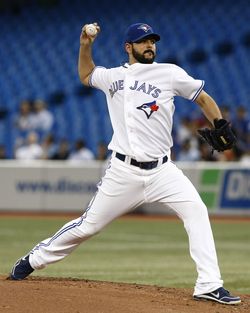 Chicago has sought out rotation depth this offseason, and they've already signed Scott Baker and Scott Feldman as our Free Agent Tracker shows. They also made a run at Anibal Sanchez and are reportedly a final suitor for Edwin Jackson. Villanueva, Baker, and Feldman will join rotation incumbents Jeff Samardzija, Matt Garza, and Travis Wood.

Villanueva, 29, pitched to a 4.16 ERA with 8.8 K/9 and 3.3 BB/9 in 125 1/3 innings spread across 16 starts and 22 relief appearances for the Blue Jays last season. He's made 29 starts and 42 relief appearances over the last two seasons and has proven capable in both roles. Earlier this offseason we heard Villanueva was reportedly seeking the opportunity to make 30 starts next season, an opportunity the Cubs can provide.

MLBTR's Tim Dierkes ranked Villanueva as the 29th best free agent on the market this offseason, predicting he would sign with the Royals. To see where you stand in our Free Agent Prediction Contest, check out our leaderboard.