Villanueva, who turned 33 this offseason, spent the 2016 campaign with the Padres and struggled to a 5.96 ERA in in 74 innings of relief. The veteran swingman did display some more encouraging peripherals, including a 7.4 K/9 rate, 1.7 BB/9 and an 11 percent swinging-strike rate, but interest in the soft-tossing righty (88.1 mph average fastball in ’16) never picked up much steam this winter. In fact, today’s signing marks the first time that Villanueva’s name has been tagged here at MLBTR since inking his one-year deal with San Diego in Jan. 2016.

Prior to his ugly 2016 season, Villanueva enjoyed a terrific year with the Cardinals, during which he logged 61 innings with a 2.95 ERA, 8.1 K/9, 3.1 BB/9 and a 42.4 percent ground-ball rate. That year served as an exclamation point on a nice five-year run that saw Villanueva toss 499 2/3 innings of 4.03 ERA ball while pitching for the Blue Jays, Cubs and Cards. Next year’s crop of free-agent pitchers is superior to the group that hit the open market this year, but a rebound campaign in the hitters’ paradise that is the KBO could either create renewed Major League interest in Villanueva or earn him a more substantial payday overseas in 2018 and beyond.

The Padres have reached agreement on a one-year, $1.5MM deal with righty Carlos Villanueva, Jeff Passan of Yahoo Sports reports on Twitter. Villanueva is represented by Relativity Sports.

The 32-year-old Villanueva spent the 2015 campaign with St. Louis, where he worked in a multi-inning relief role, logging 61 innings across 35 appearances. With the Cardinals, he worked to a very strong 2.95 ERA with 8.1 K/9, 3.1 BB/9 and a 42.4 percent ground-ball rate. Villanueva stranded an inordinate amount of baserunners, prompting sabermetric ERA estimators like FIP, xFIP and SIERA to peg him more for an ERA in the mid- to upper-3.00 range, so a repeat of that sub-3.00 ERA might not be something Padres fans should count on. He’ll also most likely be moving to an inferior defensive club, although on the flip side, he’ll be moving to a more pitcher-friendly home park.

Villanueva could compete for a rotation spot or a reprise his bullpen role with the Padres, as he has experience in both capacities. However, if he’s to assume the role of long reliever/swingman, that would seem to make Odrisamer Despaigne a somewhat redundant piece. Despaigne soaked up 125 1/3 innings for the Padres in that capacity last season, although he also posted a sky-high 5.80 ERA and saw his strikeout rate drop considerably in his second season of Major League action.

As the Cubs head into the offseason, the team is expected to look at reviving many of the summer trade deadline talks that never came to fruition, Gordon Wittenmyer of the Chicago Sun-Times reports. As president of baseball operations Theo Epstein said yesterday, Chicago is after pitching. The team could rejoin its pursuit of pitchers such as Tyson Ross of the Padres, Julio Teheran of the Braves, and Carlos Carrasco of the Indians, per Wittenmyer. Interestingly, he adds that the Cubs are rather enamored of Indians converted outfielder Lonnie Chisenhall, who rather suddenly became an outstanding right fielder last year after moving off of third base. Wittenmyer says it wouldn’t be surprising to see Javier Baez, Starlin Castro, or Jorge Soler (or any two of them) moved for pitching this winter, adding that Atlanta is “especially high on Soler.”

Here are some more notes out of the NL Central:

FEBRUARY 24th: Villanueva will earn $2MM if he reaches the majors, according to Jon Heyman of CBSSports.com (via Twitter).

FEBRUARY 4th: The Cardinals have reached a minor league pact with righty Carlos Villanueva, Derrick Goold of the St. Louis Post-Dispatch reports on Twitter. Villanueva will receive an invitation to big league camp.

The 31-year-old swingman spent the past two seasons with the Cubs, working to a cumulative 4.27 ERA over 206 1/3 innings (including twenty starts) with 7.6 K/9 against 2.6 BB/9. Though he was hit hard when working from the rotation last year, Villanueva held opposing hitters to a .226/.284/.364 slash in 237 plate appearances when pitching from the bullpen.

Villanueva looks to be a solid depth addition to a Cardinals staff that has plenty of talent, but also some important questions. It seems unlikely that he will crack the rotation out of camp, but could have a reasonable claim to a long-man/spot-starter role.

Carlos Villanueva had hoped to throw in a different division before he was contacted by the Cardinals, Derrick Goold of the St. Louis Post-Dispatch reports. After spending seven of his nine seasons with NL Central teams, Villanueva will look to take a swingman role with St. Louis. Though Villanueva was given no guarantees, Goold says that the club targeted him with hopes he would earn a pen/spot starter slot in camp.

Here are some notes from the rest of the division:

The Cubs have plenty of trade chips remaining, but time is running out to deal them as tomorrow's 4pm ET deadline looms. Here's the latest… 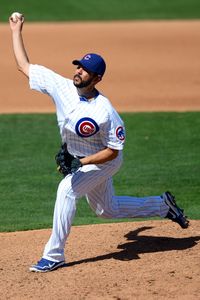