The Giants and right-hander Santiago Casilla have agreed to a three-year, $15MM contract with a vesting option for a fourth season.  The deal will pay Casilla $4.5MM in 2013 and 2014 and $5MM in 2015, plus a $1MM buyout for 2016 if his option doesn't vest.  Casilla is represtented by ACES. 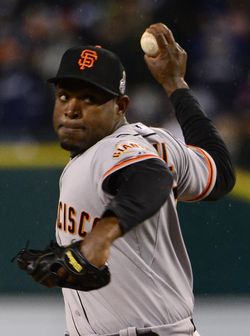 Casilla took over as the team's closer when Brian Wilson went down with Tommy John surgery early in the season and led the Giants with 25 saves on the year. As a result, MLBTR contributor Matt Swartz projected that Casilla would earn $5.4MM in his third year of arbitration eligibility. The contract buys out that final year of arbitration and gives the Giants control over two of Casilla's free agent seasons, with an option for a third.

As MLBTR's Transaction Tracker shows, Giants general manager Brian Sabean has done his best to keep his World Series winning roster together this offseason. He's brought back Jeremy Affeldt and Marco Scutaro on three-year deals and re-signed Angel Pagan to a four-year deal. Sabean also signed Andres Torres to a one-year deal, who was a part of San Francisco's 2010 World Series team.

Hank Schulman of the San Francisco Chronicle was the first to break the news of the signing, plus the contract length and payment breakdown (all links to Twitter).  Ken Rosenthal of FOX Sports and Andrew Baggarly of CSN Bay Area Twitter also added details about the move (both Twitter links).