They say timing is everything, and surely Angel Pagan would agree after signing a four-year, $40MM contract to remain with the Giants.  Acquired by San Francisco a year ago in a change of scenery trade, the Legacy Sports Group client parlayed a .288/.338/.440 performance and World Series buzz into the second-largest contract of the offseason so far.  The new contract has a $5MM signing bonus and salaries of $7MM in 2013, $9MM in '14, $9MM in '15, and $10MM in '16, tweets Andrew Baggarly of CSNBayArea.com. 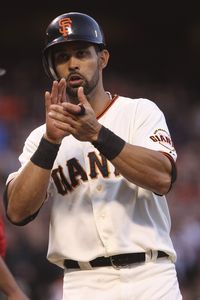 San Francisco had been one of Pagan's strongest suitors for most of the offseason, with the Phillies also in pursuit.  Former Phils outfielder Michael Bourn is the top center fielder still available with Pagan, Shane Victorino, B.J. Upton, and Denard Span off the board.

Pagan bounced back from a down 2011 season and was valued at nearly five wins above replacement in 2012, providing all-around production. The center fielder ranked 11th on MLBTR's list of this winter's top 50 free agents, with four of MLBTR's writers accurately predicting that he'd return to the Giants.