The Twins locked up one of their best relievers today, signing Jared Burton to a two-year, $5.5MM extension with a $3.6MM club option for 2015.  Burton would have been entering a walk year in 2013, so the contract buys out one free agent year with an option for another.  He's represented by Dave Pepe of Pro Agents, Inc. 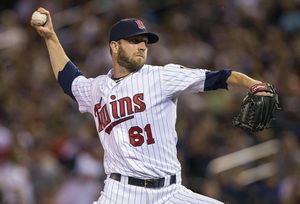 Burton, 31, inked a minor league deal with the Twins last November and made the big league roster after a strong showing in Spring Training.  The right-hander had a breakout season with the Twins in 2012,  posting a 2.18 ERA, 8.0 K/9, 2.3 BB/9, 0.73 HR/9, and 48.5% groundball rate in 62 innings of work.  MLBTR contributor Matt Swartz had projected a $2.1MM salary for Burton's last trip through arbitration in 2013, so his actual $2.05MM salary isn't much of a discount.  But the Twins now have Burton potentially through 2015, as well as reliever Glen Perkins possibly through 2016 from an extension signed in March.

As MLBTR's arbitration tracker shows, the Twins' class is down to just Drew Butera and Brian Duensing.