4:50pm: The Brewers announced that they extended Gomez for three years, through the 2016 season. The deal buys out Gomez's first three free agent seasons. “He has always had the physical skills, and his recent performance has given us the confidence that he will take the next step in becoming one of the top center fielders in the game," GM Doug Melvin said.

4:07pm: The Brewers are going to extend center fielder Carlos Gomez with a four-year contract, Tom Haudricourt and Todd Rosiak of the Milwaukee Journal Sentinel report (Twitter links). Gomez, a client of the Boras Corporation, will obtain about $27.5MM. 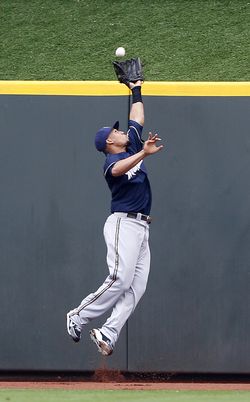 Gomez had been on track to hit free agency following the 2013 season, so this deal delays his arrival on the open market. The sides agreed to a one-year, $4.3MM contract for 2013 earlier this year.

It's not clear if the deal covers the 2013-16 seasons or the 2014-17 seasons, but Haudricourt suggests the deal buys out three free agent seasons (Twitter link). If that's the case the sides agreed to value Gomez's free agent years at approximately $7.7MM each.

Gomez has been traded twice since the Mets signed him as an amateur free agent in 2002. The Twins acquired him in the trade that sent Johan Santana to New York. Two offseasons later Gomez was traded to Milwaukee in the deal that sent J.J. Hardy to Minnesota.

As MLBTR's list of 2014 free agents shows, a number of prominent center fielders are still on track for free agency after the 2013 season. Curtis Granderson, Jacoby Ellsbury and Coco Crisp are among the prospective free agents for next offseason.

Some observers will be surprised that Boras, an agent known for taking clients to free agency, completed this contract. However, Boras clients such as Jered Weaver, Carlos Gonzalez and Ryan Madson have all signed extensions covering free agent seasons in recent years, so there's some precedent for Gomez's deal.