After the Mariners moved in the fences at Safeco Field and acquired several veteran bats in the offseason, it has to be disheartening for the team and their fans that the M's are again struggling at the plate.  The Mariners are near the bottom of the league in most offensive categories, carrying an overall team slash line of .233/.296/.371 heading into Friday's action.

The offensive slump can't be blamed on at least one of those newcomers.  Kendrys Morales hit .253/.354/.422 with three homers though his first 96 PA, roughly on pace with the .787 OPS he posted with the Angels in 2012 though this season Morales has hit for less power and reached base more often.  He's been one of the bright spots in the Seattle lineup but if the M's can't pull themselves together, Morales could be expendable come the July trade deadline. 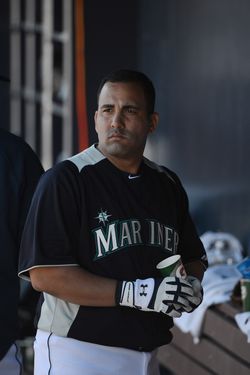 Morales was acquired by the Mariners in December in a one-for-one swap with the Angels that sent Jason Vargas to Anaheim.  It was a logical move for both teams as the Angels needed space at DH and the Mariners had an excess of starting pitching given the number of young arms in their system.  Morales was a short-term investment for the M's since he is only under contract through this season, earning $5.25MM in his last year of arbitration eligibility.  That's a very good price for a solid bat, and if Morales is a deadline pickup, a trade suitor would owe the switch-hitter just $1.75MM over the last two months of the season.

* Rockies.  While Morales has played some first base since his return from the leg injury that cost him almost the entirety of the 2010-11 seasons, he is best suited for a DH role.  An NL team might not want to risk playing Morales in the field every day, but if the surprising Rockies stay in the NL West race, they could acquire Morales and only use him against right-handed starters.  Colorado has the right-handed hitting Jordan Pacheco to use against southpaws as Morales only has a career .714 OPS against lefty pitching.  Todd Helton (currently on the DL) is also still in the mix at first for the Rockies but the club can't expect much from their former franchise player given his recent injury history.

* Giants.  Brandon Belt's struggles have left the Giants thin at first base, but I see Morales as very much a longshot fit for their needs.

* Tigers.  If Victor Martinez still hasn't returned to form by midseason, Detroit might look to improve their designated hitter spot.  Scott Boras, Morales' agent, could be a factor in such a trade given his good relationship with Tigers owner Mike Ilitch.

* Rays.  Tampa Bay is another offensively-challenged team that has Wil Myers waiting in the wings for a call-up to play right field and Luke Scott on a minor league rehab assignment.  Morales would be an upgrade over Scott at DH and, since Morales' remaining salary would be in the $1.75MM range, he'd fit into the Rays' limited payroll.

* Orioles.  Nolan Reimold has been getting the majority of the DH at-bats with Wilson Betemit out until June.  The O's could be in the market for an upgrade but it's doubtful given that a healthy Betemit hits right-handers well enough to make Morales redundant.

It could be argued that the Mariners should not only keep Morales but also pursue an extension with him, given that the 29-year-old is one of the team's few productive bats.  Scott Boras clients, however, generally go to free agency and you wonder if Morales would want to remain at pitcher-friendly Safeco Field over the long term.  Besides, the M's could always deal Morales at the deadline and then pursue him again as a free agent in the offseason.  Trading Morales in June or July would net the Mariners a decent prospect or two as they may already be looking to reload for 2014.