After dominating the trade rumor headlines for weeks, Ricky Nolasco has finally found a new team. The Southern California native will get a chance to play for his hometown Dodgers, as the club officially agreed today to acquire the longtime Marlins starter in exchange for a trio of pitching prospects. Headlining the arms coming to Miami is young righty Angel Sanchez, who is joined by right-handed relievers Steve Ames and Josh Wall. 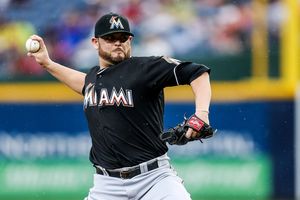 Along with Nolasco, the Dodgers will receive the rights to international signing bonus slot number 96, which carries a $197k bonus allocation. (Click here to see how the international slot system works in practice.) Los Angeles will also take on all of the approximately $5.5MM remaining on Nolasco’s contract.

Barring an extension, Nolasco will become a free agent at the end of the season. Since he did not begin the year with the Dodgers, Nolasco's new employer will not be able to obtain draft pick compensation by making him a qualifying offer. Although Nolasco never seemed particularly likely to receive a qualifying offer even had he remained in Miami, the trade is good news for his pending free agency. As MLBTR's Tim Dierkes has explained, teams can sign a player who avoids a qualifying offer without sacrificing a draft pick, which in turn enhances the value of that player on the open market. (On the other hand, Nolasco may see a taxe hike like that experienced by some of his former Miami teammates.)

Nolasco, 30, now sports a 3.85 ERA over 112 1/3 innings in 2013 after a strong outing against the Braves on Wednesday. He has struck out hitters at a 7.1 K/9 pace while walking just 2.0 per nine and generating a 41.9 percent ground-ball rate. He has posted a 4.44 ERA in 1225 2/3 career innings, and has logged over 180 innings in four of his last five seasons. On pace to top 200 innings for the third time in his career, Nolasco promises to be a solid, reliable rotation option for his new club.

At the time of his departure from Miami, Nolasco stands atop the franchise's record books in both wins and strikeouts. Over his eight-year Marlins career, he notched 81 victories and struck out over 1,000 batters. Nolasco was also far and away the highest paid player in a rebuilding Miami dugout this year, with his $11.5MM price tag dwarfing that of Placido Polanco, who was second on the payroll at a meager $2.75MM.

The three prospects that will join the Marlins each ranked among the Dodgers' top thirty farmhands going into the season, according to Baseball America. Sanchez was the lowest among them, registering at number 25. Nevertheless, MLB.com's Jonathan Mayo pegs him as L.A.'s eight-best prospect. The 23-year-old possesseswhat BA calls an "exciting arm," though he has yet to dominate in the lower minor leagues and could be converted to a reliever. Mayo says Sanchez's live, low-to-mid-90's heater and promising-but-inconsistent slider and change make him a possible mid-rotation starter.

The other two minor leaguers have already been converted to relievers, and in that respect possess less upside than Sanchez. Ames notched the 21st slot on Baseball America's list of top Dodger prospects, with BA saying he could be ready as a 7th or 8th inning setup man in the big leagues as soon as this year. The 25-year-old reliever has pitched to a 3.67 ERA in 34 1/3 innings at Triple-A to date in his first season at that level. He has, however, seen his strikeout rate decline and walk rate go up this season, as compared to the stellar marks he put up in the lower minor league levels. Wall checked in one spot ahead of Ames among Dodgers prospects before the season, but has struggled in 2013. He was shellacked (14 earned runs in 7 innings) during a big league call-up and has a 5.60 ERA in 27 1/3 Triple-A innings. BA says that the tall righty possesses late-game stuff, but has still yet to master his command.

Ken Rosenthal of FOX Sports first reported that the teams were in serious negotiations and that three lower-level prospects would be included, as well as international slot money. (Twitter links). MLB.com's Joe Frisaro was the first to report (on Twitter) that a deal was expected to be completed tonight and would include three pitchers going back to Miami. MLB.com’s Joe Frisaro was the first to report (tweet) that Steve Ames was one of the three players to be sent from Los Angeles, while Chris Cotillo of MLBDailyDish.com was the first to reports (via Twitter) that Josh Wall and Angel Sanchez would also be included. Frisaro first reported that the deal was completed via Twitter. ESPN.com's Jayson Stark confirmed (on Twitter) that the Dodgers would take on all of Nolasco's salary.