The Padres have bolstered their rotation for the present and future, acquiring righty Ian Kennedy from the division rival Diamondbacks for lefty reliever Joe Thatcher, Double-A reliever Matt Stites, and a compensation round B draft pick, according to a tweet from MLB.com's Corey Brock.  It's a surprisingly light haul for Kennedy, a 28-year-old who is under team control through 2015 as an arbitration eligible player. 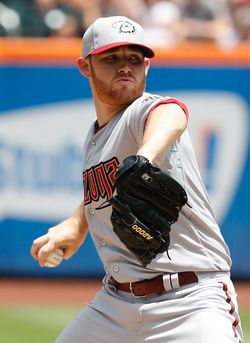 Drafted 21st overall by the Yankees in '06, Kennedy joined Arizona in the December 2009 three-team trade with the Yanks and Tigers, at a time when Josh Byrnes was the Diamondbacks' GM.  Byrnes was fired the following year and later landed the GM job in San Diego, while Kevin Towers took over for Arizona.  Clearly, Byrnes has an affinity for Kennedy, who tossed 624 1/3 regular season innings from 2010-12 with a 3.55 ERA and finished fourth in the NL Cy Young voting back in 2011.  Kennedy's walk rate worsened this year, en route to a 5.23 ERA in 124 frames.  His skills suggest something closer to 4.00 moving forward.  As a fly-ball pitcher, Kennedy will likely benefit tremendously from leaving the hitter-friendly Chase Field to a more pitcher-friendly stadium in Petco Park.

To clear space on the 40-man roster following the trade, the D'Backs have outrighted Nate Adcock to Triple-A Reno, according to Nick Piecoro of the Arizona Republic (on Twitter).

The draft pick headed to the D'Backs is San Diego's competitive balance lottery pick, which is the first pick of Comp Round B (between the second and third rounds). As such, it will likely fall in the 70 to 75 range; Comp Round B consisted of picks 69 to 73 in this year's draft. Those picks carried assigned values of between $808K and $759K, according to Baseball America.

Towers and the Diamondbacks clearly thought Kennedy to be expendable with Trevor Cahill and Brandon McCarthy on the mend and Archie Bradley in the minor leagues. Kennedy scored a near-record $4.265MM salary for 2013, his first arbitration year.  MLBTR contributor Matt Swartz projects a mild raise to the $5.9MM range for 2014, so there's a financial element to the trade as well. Still, it seems to be an underwhelming return for a pitcher with Kennedy's upside, even in a down season.

As shown in MLBTR's Transaction Tracker, Towers and Byrnes have connected on a pair of past deals for Tony Clark and Scott Hairston back in 2008 and 2007, respectively.