10:30am: The Yankees' decision to let Russell Martin depart as a free agent and use in-house options at catcher last offseason proved to be costly, but general manager Brian Cashman has made sure to upgrade that hole in his lineup in the biggest possible way. The Yankees officially announced today that they have signed Brian McCann to a five-year contract. Reportedly worth $85MM, the contract also contains a sixth-year vesting option that can push the total value to an even $100MM. McCann, who is represented by B.B. Abbott of Jet Sports Management, will also reportedly receive a full no-trade clause. 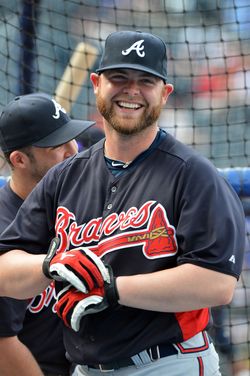 As Ken Rosenthal of FOX Sports notes in his article on the deal, the average yearly salary McCann will receive, $17MM, is the highest ever given to a catcher in free agency. While Joe Mauer's average yearly rate of $24MM remains the record for catchers overall, the Twins have said that Mauer will transition to first base on a full-time basis beginning next season, meaning McCann is set to become the game's highest-paid backstop.

McCann posted a typically strong offensive season in 2013, hitting .256/.336/.461 in 402 plate appearances, but he's likely to see his power rise significantly with the presence of the short porch in Yankee Stadium's right field. McCann's defense is also rated highly by various metrics. While his 2013 total of 102 games in 2013 represented a career-low for a full season, the 29-year-old has usually been a durable catcher. Switching to the AL should also allow him to transition to DH as he ages.

McCann was this offseason's top free agent catcher and one of the top free agents overall. While the Yankees had options such as Chris Stewart and Austin Romine in the mix for their 2014 backstop job, the signing represents a significant upgrade. The Yanks forfeit the 18th overall pick in the June draft in signing McCann, while the Braves, the catcher's former team, gain a pick after the first round.

The Rangers and the Red Sox were also known to be targeting McCann. Jarrod Saltalamacchia is now likely the best remaining free agent option behind the plate.