There have been 23 perfect games in Major League history and 16 instances of a player hitting four home runs in one game, and both of these rare baseball events have taken place on April 30.  White Sox right-hander Charlie Robertson threw a perfecto against the Tigers on this day in 1922; 39 years later, the legendary Willie Mays homered four times as part of a 14-4 Giants rout of the Braves.  Incredibly, there have been two other instances of a four-homer game and a perfect game on the same day — July 18 (Pat Seerey in 1948 and David Cone in 1999) and May 8 (Josh Hamilton in 2012 and Catfish Hunter in 1968).

2014 looked like a rebuilding year for the White Sox, but with Jose Abreu bursting onto the scene to become a star power bat, could the Pale Hose contend this season?  GM Rick Hahn told reporters (including CSN Chicago’s Dan Hayes and MLB.com’s Scott Merkin) that “it really is a balancing act.  You don’t want to pass on a chance to win. They are sacred. At the same time, this is a long-term proposition we are trying to build here, sustain over an extended period, and we don’t want to hamper our ability to do that.”  It’s still too early in the season to make “short-sighted” moves, Hahn said, yet if the Sox are in the race in a couple of months, the team will re-evaluate its goals for the season.

Here’s some more from around the junior circuit…

The bullpen was one of the Blue Jays’ few strengths in 2013 and yet the relief corps has gotten off to a terrible start this year, Sportsnet.ca’s Shi Davidi writes.  Last night’s blowup against the Royals was only the latest in a series of late-game meltdowns for the bullpen, which has a cumulative 5.08 ERA that ranks as the third-worst in the majors.  Here’s some more news from Toronto…

Here are Wednesday’s minor moves from around the league…

The injury-riddled Brewers may have suffered another knock today when Matt Garza was removed from today’s 9-3 loss to the Cardinals.  Garza suffered a bruised right thumb while batting in the top half of the fourth inning, and came out of the game after facing one batter in the bottom of the fourth.  With Ryan Braun, Jean Segura, Aramis Ramirez and now Garza all facing nagging injuries and the bullpen piling up appearances, some roster moves may be in order for the Crew, as you’ll read in this edition of Brewers Notes…

Homer Bailey’s extension with the Reds could have a ripple effect within the NL Central, as Gordon Wittenmyer of the Chicago Sun-Times believes Bailey’s six-year, $105MM deal greatly exceeded a five-year extension offer the Cubs made to Jeff Samardzija.  It has been widely speculated that Samardzija will be traded or leave in free agency rather than remain a Cub, though Bailey himself isn’t so sure.  “I think the Cubs will spend money where they feel like it’s needed,” Bailey said.  “And maybe it will be Samardzija. We don’t know that.  The Cubs might be playing a bluff card. That’s part of going into a negotiation, too. There’s so many strategies.”

Here’s the latest from around the division…

FRIDAY 7:12pm: “No decision on the next course of treatment will be finalized” until Dr. Mehlhoff sees Griffin on Tuesday, A’s assistant GM David Forst tells Susan Slusser of the San Francisco Chronicle (Twitter link).

6:28pm: Athletics righty A.J. Griffin will undergo Tommy John surgery next week, a source tells Joe Stiglich of CSNBayArea.com.  An elbow issue first cropped up for the 26-year-old pitcher in March, and word came from A’s manager Bob Melvin this week that Griffin would visit Houston-area specialist Dr. Thomas Mehlhoff on Tuesday for a second opinion.

Griffin provided 200 innings of 3.83 ball as a member of the A’s rotation last year.  The A’s had already lost Jarrod Parker to Tommy John in March.  The A’s seemed to have a surplus of starting pitching when they reached an agreement with Scott Kazmir in December, but attrition has taken its toll.  Nonetheless, Oakland’s 2.74 rotation ERA ranks first in the American League this year.  The group is comprised of Kazmir, Sonny Gray, Dan Straily, Tommy Milone, and the surprising Jesse Chavez.  The A’s may still be compelled to add to their starting pitching depth as the summer wears on.

In an ESPN article today, Jayson Stark addressed this year’s Tommy John epidemic, of which Griffin appears to be the 17th victim.

The Dodgers today announced that they’ve selected the contract of catcher Miguel Olivo and promoted him to the big league club, optioning Tim Federowicz to Triple-A to clear room on the 25-man roster. To make room on the 40-man roster, Chad Billinglsey was placed on the 60-day DL. Olivo hit well in a very small sample at Triple-A after signing a minor league deal with the Dodgers this offseason, slashing .390/.438/.661 in 64 PAs. Here are a couple more Dodgers notes as the team hopes to squeeze in a three-game set with the Twins despite some poor weather in Minneapolis…

Though the Rockies continued their hot start by improving to 16-12 last night, the mood was dampened by the departure of right-hander Tyler Chatwood with elbow tightness, Patrick Saunders of the Denver Post writes. It may not be too serious, as manager Walt Weiss wasn’t sure if an MRI would be utilized, but as Saunders points out, Chatwood missed nearly a month last season with elbow tightness. He also had bone chips removed from the elbow last October. Colorado has already seen its rotation hampered by injuries to Jhoulys Chacin and Brett Anderson, and losing Chatwood for any amount of time would be yet another blow. Here’s more from baseball’s Western divisions…

The Tigers have announced that left-handed starter Robbie Ray will be recalled and make his Major League debut against the Astros next Tuesday. 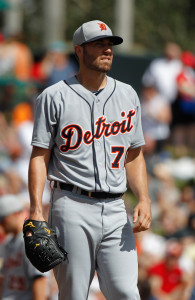 The 23-year-old Ray ranked 91st on MLB.com’s list of Top 100 prospects prior to the season and was the centerpiece to the trade that sent right-hander Doug Fister from the Tigers to the Nationals this offseason (Detroit also received utility infielder Steve Lombardozzi lefty reliever Ian Krol). He’s gotten off to an excellent start to the year in Triple-A, posting a 1.59 ERA with a 21-to-5 K/BB ratio in 28 1/3 innings of work (five starts). In their free scouting report, Jonathan Mayo and Jim Callis of MLB.com offered the following take on Ray:

“Ray throws his fastball in the low-90s and can reach back for a tick more velocity when he needs it. His slider can look slurvy at times, but the best ones have good depth. He has a good feel for his changeup, which is a more consistent offering. His command has improved, but he would benefit from further refinement. Ray is a good athlete and has proven to be durable. He relies more on pitchability than overpowering stuff to get outs, but he has what it takes to succeed as a middle-of-the-rotation starter.”

Ray’s promotion was necessitated by an injury to Anibal Sanchez, but should he impress to the point where he sticks on the roster, his promotion likely will lead him to Super Two status. If his official promotion is delayed until next Tuesday, he would accrue 148 days of Major League service time through season’s end, which would almost certainly place him within the top 22 percent of the two-to-three year service class following the 2016 campaign. That would make Ray eligible for arbitration four times, beginning after the ’16 season, and also setting him to hit free agency in the 2019-20 offseason. Of course, that schedule would change were Ray to be sent back down when Sanchez returns, which should be sometime in mid-May.

Somewhat ironically, Ray is making his Major League debut before the injured Fister has thrown a single Major League pitch for the Nationals. The trade was widely panned in the media at the time, as many felt that Tigers GM Dave Dombrowski received too little for Fister, and it’s been compounded by his decision to trade Lombardozzi for Alex Gonzalez, who has already been released. Ray’s development into a reliable starting option for the Tigers would greatly change that perception.