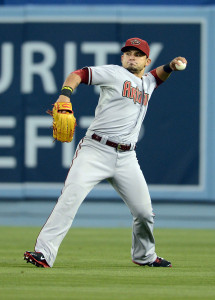 Parra, 27, is hitting .259/.305/.362 in 440 plate appearances this year, playing mostly right field for Arizona.  Parra has typically posted stellar defensive metrics, though he’s been about average this year based on UZR and DRS.  He has about $1.6MM remaining on his contract this year, and is arbitration eligible for 2015.  A left-handed batter, Parra could enter something of a platoon with Khris Davis in left field.  Or, he may just spell Davis, Carlos Gomez, and Ryan Braun as an oft-used fourth outfielder.

Haniger, 23, is hitting .255/.316/.416 in 271 plate appearances at Double-A this year.  Baseball America rated Haniger the third-best prospect in the Brewers’ weak farm system prior to the season, calling him the team’s most advanced hitting prospect.  The Brewers drafted Haniger 38th overall in 2012 as a supplemental draft pick for the loss of Prince Fielder.  Banda, 20, is a southpaw starter with 83 2/3 innings at Low-A this year.  Baseball America ranked him 27th among Brewers prospects prior to the season, though they say the team viewed him as a potential mid-rotation starter.