AUG. 28: The Phillies have announced that they’ve acquired right-hander Victor Arano as the second player in the Hernandez trade. The 19-year-old Arano ranked as the Dodgers’ No. 14 prospect on MLB.com’s midseason Top 20 list.

Arano totaled a 4.08 ERA with 8.7 K/9 and 2.1 BB/9 in 86 innings of work at Class-A Great Lakes this season, making 15 starts and eight relief appearances. Jim Callis and Jonathan Mayo of MLB.com praise Arano’s 90-91 mph fastball (which tops out at 94 mph) and slider, though they note that his changeup needs more work. Still, Arano is physically mature for a teenager and shows an advanced feel for pitching, per the MLB.com duo, who project him as a starter in the long term despite the fact that he’s presently had more success in the bullpen.

AUG. 16: The Phillies have announced that one of the two players they’re acquiring from the Dodgers is second baseman Jesmuel Valentin, a 2012 first-round pick from Puerto Rico who was hitting .282/.352/.433 for Class A Great Lakes as a 20-year-old. Heading into the season, Baseball America’s Prospect Handbook 2014 listed him as the Dodgers’ 22nd-best prospect, projecting him as a utility player. MLB.com ranked him at No. 13 in the Dodgers’ system and was somewhat more optimistic, suggesting he lacks power but could be the sort of hitter who typically bats second in a team’s batting order. He is the son of former big-league infielder Jose Valentin.

AUG. 7: The Phillies announce that they have traded Roberto Hernandez to the Dodgers for two players to be named later or cash considerations.  The Phillies placed Hernandez, along with a number of other players, on revocable waivers on Saturday. 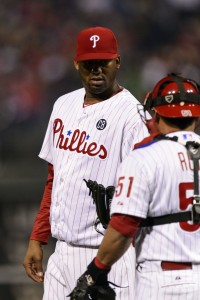 The Phillies signed Hernandez to a one-year, $4.5MM deal last winter, and he posted a 3.87 ERA with 5.6 K/9 and 4.1 BB/9 in 121 innings for them, with a strong 52.0% ground ball rate. He has gotten good results recently, with a 2.18 ERA in three starts since the All-Star break. Hernandez, formerly known as Fausto Carmona, has played parts of nine seasons, also spending time with the Indians and Rays.

Hernandez’s role with the Dodgers is unclear. Obviously, they have a strong rotation featuring Clayton Kershaw, Zack Greinke, and Hyun-Jin Ryu. Josh Beckett has, however, struggled in three outings since returning from the disabled list with a hip injury, and Matt Gelb of the Inquirer tweets that Hernandez will start in Beckett’s place Friday.

For the Phillies, the move marks their first trade of a veteran since their very quiet trade deadline. It may have helped them that Hernandez’s contract was a relatively easy one to trade. The Phillies are currently 51-63 and in last place in the NL East.