Brian Wilson has informed the Dodgers that he will exercise his player option for 2015, which will be worth $9.5MM, reports Chris Cotillo of MLB Daily Dish (Twitter links). 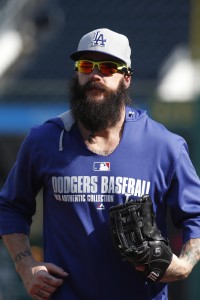 The bearded closer-turned-setup-man appeared in 61 games with the Dodgers this season, totaling 48 1/3 innings of 4.66 ERA ball. In what was his first full season back from his second Tommy John operation, Wilson’s fastball velocity dipped to an average of 92.1 mph, and is command faltered a bit, as he issued 5.4 walks per nine innings pitched. He did, however, maintain his stellar strikeout rate, averaging 10.1 punchouts per nine innings.

Wilson’s tenure with the Dodgers began late in the 2013 season when he inked a $1MM big league deal in August and enjoyed a successful late-season and postseason run with L.A. He allowed one run in 19 2/3 innings between the regular season and postseason, striking out 21 against just six walks. That performance earned him a one-year contract that guaranteed him $10MM in 2014 with a $9MM player option that contained incentives based on appearances.

Were Wilson to again test the open market, he’d have gone up against a strong class of setup men that featured the likes of Luke Gregerson, Andrew Miller and Pat Neshek in addition to a few closers who lost their grip on the ninth inning but pitched well in an eighth-inning role (e.g. Sergio Romo and Jason Grilli). Instead, he’ll return to a contending team’s bullpen with a strong salary relative to his peers. Presumably, Wilson will look to reestablish his command and restore his once-excellent ground-ball rate (his 38.1 percent mark in 2014 was 10 percent lower than his career mark) in hopes of cashing in on a larger multi-year deal next offseason.