THURSDAY, 9:19pm: Wilson has passed his physical, so the deal is now official, Dylan Hernandez of the Los Angeles Times tweets.

1:39pm: The Dodgers have reached an agreement with reliever Brian Wilson, tweets Yahoo's Tim Brown.  It's a one-year, $10MM deal with a second year player option.  Bob Nightengale of USA Today reports (on Twitter) that the option's value is $9MM, meaning that Wilson is guaranteed at least $19MM on this two-year pact.  Jim Bowden of ESPN and MLB Network Radio tweets that Wilson has another $700K of incentives built into each year of the deal. 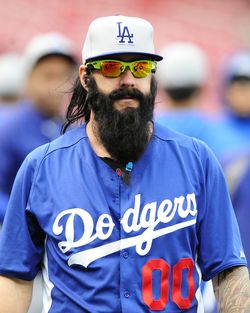 Though Wilson will be receiving closer money from the Dodgers, he's fine with setting up Kenley Jansen if that's how it works out, notes Brown.  Paying Wilson closer money can be offset by the fact that Jansen will be paid more like a setup man, as he projects to earn $4.8MM in arbitration this offseason, per MLBTR's Matt Swartz.

Wilson signed a $1MM, Major League contract with the Dodgers on July 30th last year after a long recovery from April 2012 Tommy John surgery.  He returned in late August in dominant fashion, yielding just one run with a 21-to-6 K/BB ratio in 19 2/3 innings between the regular season and the playoffs.  His strong showing put him in line for a significant payday on the free agent market, and there was widespread interest in the bearded flamethrower.  The Tigers, Mariners and Rockies were among the other teams interested in Wilson.

Wilson's player option is a nice safeguard for he and his agents at the MVP Sports Group.  Should he thrive in Los Angeles as he did over his brief tenure there in 2013, he will hit the open market in the 2014-15 offseason as perhaps the top closer on the free agent market, positioning himself for a significant payday entering his age-33 season.  Should he fall to injury or suffer a down season, he can simply elect to take a $9MM payday and look to cash in heading into his age-34 season, which we've seen numerous relievers do.  Wilson's $10MM guarantee is slightly more than the one-year, $8.5MM guarantee that MLBTR's Steve Adams pegged him for in his free agent profile of Wilson back in late October.