Another Yankees catcher is on his way to Pittsburgh, as Francisco Cervelli has been acquired by the Pirates in exchange for lefty reliever Justin Wilson, the teams announced tonight. 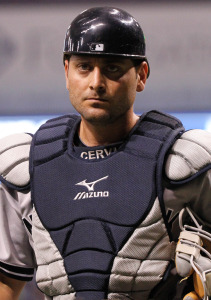 Cervelli’s arrival in Pittsburgh could be protection against losing free agent Russell Martin, though Heyman tweets that the Bucs are still in on Martin. As things stand, the 28-year-old would presumably pair with Chris Stewart in the club’s mix behind the dish. (Oddly, all three of those backstops, of course, went to Pittsburgh from New York.)

The Pirates are getting a catcher who has performed well in limited recent action. Unfortunate injuries — a foul tip and collision followed by a hamstring strain — cut Cervelli short in each of the last three years, holding him to just 225 plate appearances. But he does own a .291/.373/.447 slash in that stretch, and could be a solid piece if he can stay on the field. Because of his limited ability to rack up statistics, Cervelli is projected by MLBTR/Matt Swartz to earn only $1.1MM next year.

Jon Heyman of CBS Sports first reported, on Twitter, that the Pirates had acquired Cervelli, and the New York Post’s Joel Sherman tweeted that Wilson was headed to the Bronx in exchange.