The Royals announced that they have re-signed right-hander Jason Frasor to a one-year deal with a mutual option for the 2016 season. Frasor, a client of agent Dave Meier, reportedly receives a $1.25MM base in 2015 with a $2MM option that contains a $550K buyout. That makes for a $1.8MM guarantee, and the deal also calls for as much as $500K of incentives in each season. 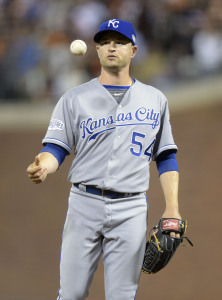 Frasor, 37, was acquired by the Royals in a mid-July swap that sent minor league righty Spencer Patton to the Rangers. The veteran Frasor was excellent for the Royals in both the regular season and the postseason, allowing a combined four earned runs in 23 innings of work. Frasor doesn’t have the 93 mph heat that he used to, but he did average 91.9 mph on his fastball in 2014. Overall, he posted a solid 2.66 ERA with 8.7 K/9, 3.4 BB/9 and a 46.9 percent ground-ball rate in 47 1/3 regular season innings between the Rangers and Royals.

The Royals became notorious for their smothering defense and lights-out bullpen in the playoffs this year, but the relief corps was actually a very top-heavy unit. Behind Greg Holland, Wade Davis and Kelvin Herrera, only Aaron Crow topped 40 innings, and Crow was largely ineffective. Frasor will provide the club with some much-needed depth in the middle innings.

As I noted in Kansas City’s Offseason Outlook, bullpen help was (and likely still remains) an area of need for the Royals. In particular, the club will likely look at left-handed relief options, as they’ll be short on reliable southpaws next season. Tim Collins struggled with his command again in 2014 and is a non-tender candidate (though GM Dayton Moore did previously indicate to McCullough that he’s still considering tendering a contract to both Collins and Crow), and Scott Downs departed via free agency. That Frasor was able to be had on a modest deal is good news for the Royals, who already projected to field a payroll in the mid-$80MM range before this signing. It’s been reported that Kansas City’s payroll could top $100MM next season, so there’s some flexibility, but adding some reliable innings on a relatively low-cost deal addresses one need without significantly denting Moore’s available funds, allowing him to look for further upgrades in the rotation and possibly in right field.

Andy McCullough of the Kansas City Star was the first to report the terms of the contract (Twitter links).