It’s official: the White Sox and Athletics have agreed to a deal that sends Jeff Samardzija back to Chicago, though this time with the South Siders. Righty Michael Ynoa is going with him in return for infielder Marcus Semien, righty Chris Bassitt, Josh Phegley and Rangel Ravelo. 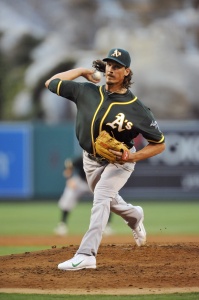 The deal continues a huge offseason for the White Sox, who also recently agreed to terms with David Robertson and have also acquired Adam LaRoche and Zach Duke to bolster a team that won just 73 games in 2014. The 29-year-old Samardzija had his best MLB season last summer, posting an outstanding 2.99 ERA with 8.3 K/9 and 1.8 BB/9 while pitching a career-high 219 2/3 innings. He’ll augment a strong-looking White Sox rotation that also will include Chris Sale and Jose Quintana.

For the Athletics, the deal continues an offseason of adjustment — the Athletics are set to lose Jon Lester, Jed Lowrie and Luke Gregerson to free agency, and they’ve traded key position players Josh Donaldson (to the Blue Jays) and Brandon Moss (to the Indians).

Semien, 24, had a terrific half-season for Triple-A Charlotte in 2014, then hit .234/.300/.372 in 255 plate appearances in the Majors, playing mostly second and third base, although he can also play shortstop. He boasts an excellent batting eye and reasonable power. The Athletics could use him in their middle infield next season.

The 25-year-old Bassitt made his big-league debut in 2014 despite missing much of the year with a broken hand. In four minor-league seasons, Bassitt has a 2.97 ERA, 8.6 K/9 and 3.9 BB/9. Baseball America’s Prospect Handbook 2014 ranked Bassitt the White Sox’ 15th-best prospect heading into the season.

Phegley, meanwhile, is a 26-year-old backstop who goes from a crowded group in Chicago to one in Oakland. He has seemingly mastered the Triple-A level, putting up back-to-back high-power, high-OBP campaigns. But he failed to take advantage of a big league opportunity in 2013 and will need to earn his way into another.

Ravelo, the only true prospect going to the A’s, is a 22-year-old corner infielder.  Last year he was promoted to Double-A and the former sixth round pick slashed .309/.386/.473 in 551 plate appearances.  Ravelo has past experience at third base but has played mostly at first base over the past two seasons.

Samardzija was born in Indiana, grew up a White Sox fan, and of course played most of his previous big-league career with the Cubs, so his return to Chicago will represent a homecoming. He is projected to make $9.5MM in 2015 through the arbitration process, and will be eligible for free agency following the season.

Jeff Passan of Yahoo! Sports, Bruce Levine of 670TheScore.com (on Twitter), and Susan Slusser of the San Francisco Chronicle (links to Twitter) all reported pieces of the deal. David Kaplan of CSNChicago.com (via Twitter) and Jon Heyman of CBS Sports (via Twitter) both contributed to the reporting on the deal’s progress.