AUGUST 7: Righty Dawrin Frias will head to Oakland to complete the deal, the A’s announced. The 23-year-old has been hit hard at the Class A level this year, while also showing significant control problems.

AUGUST 4: The Mets announced tonight that they have acquired left-handed reliever Eric O’Flaherty and cash considerations from the Athletics in exchange for a player to be named later. Fellow southpaw reliever Alex Torres has been designated for assignment to clear space for O’Flaherty on the 40-man and 25-man rosters. 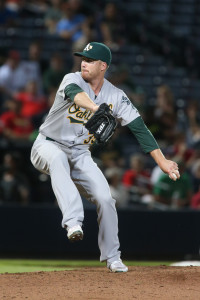 The Athletics designated O’Flaherty for assignment over the weekend to clear a roster spot for trade acquisition Aaron Brooks. The former Braves setup ace was in the second season of a two-year, $7MM contract he signed prior to the 2014 campaign as he recovered from 2013 Tommy John surgery.

O’Flaherty is owed about $1.86MM through season’s end, though the A’s appear to be picking up at least some of the tab there. He becomes the second reliever to make the cross-country journey from Oakland to Queens, as he’ll join former teammate Tyler Clippard in manager Terry Collins’ bullpen.

Torres doesn’t immediately look like a DFA candidate upon first glance, as he’s worked to a 3.15 ERA and struck out 35 batters in 34 1/3 innings. However, Torres has also walked 26 batters this year, and opposing lefties are hitting an alarming .268/.406/.393 against him in 69 plate appearances. Torres’ ERA is largely a product of a minuscule .233 BABIP and a bloated 83 percent strand rate — neither of which figures to be sustainable down the stretch.

A relatively quick DFA certainly isn’t what the Mets had in mind this spring when they traded Cory Mazzoni and a player to be named later (Brad Wieck) to the Padres in exchange for what they hoped to be several years of Torres’ services. Torres is not yet arbitration eligible — though he will be this winter — and enjoyed better performances from 2013-14 with the Rays and Padres, so perhaps a team looking for left-handed bullpen depth will give him a look if he’s placed on outright waivers. If not, the Mets will be able to outright him to Triple-A Las Vegas and keep him in the organization with the hope that some time in the minors will help to sort out his command issues.