With five days to go until Opening Day, decisions are due at noon eastern on players who qualify as Article XX(B) free agents. The rule applies to players who a) have six or more years of service; b) finished the prior season on a 40-man roster or on the 60-day DL; and c) signed Minor League deals over the offseason. If a team does not release such a player prior to the deadline, then they must either put the player on the active roster (or DL) to start the year or be on the hook for some extra benefits — a $100K retention bonus and June 1st opt-out date (at a minimum).

Ken Rosenthal looks at the durability of Nationals ace Max Scherzer, who has had just one arm-related DL stint in his career (shoulder soreness in 2009) and leads all Major League pitchers in innings pitched across the past three seasons. Rosenthal spoke to Scherzer himself, former D-backs GM Josh Byrnes, former Tigers GM Dave Dombrowski (now in Boston) and Nationals GM Mike Rizzo (Arizona’s scouting director when the D-backs drafted Scherzer) about the two-time Cy Young winner. Byrnes said Scherzer deserves credit for being “very developmentally minded” as a prospect. “He wanted to find out what he needed to do to be the best version of himself, not take what was the quickest path to the big leagues,” said Byrnes. Rizzo noted that many perceived it as an overdraft when the Diamondbacks plucked him out of Missouri at No. 11 overall in 2006 and lauded Scherzer’s arm action, pitching IQ and demeanor on the mound. Scherzer offered some interesting insight on the toll that increasing workloads can take on a developing arm as well, making for a very interesting read.

The Braves have agreed to a deal to re-sign veteran lefty Eric O’Flaherty to a minor league deal, Chris Cotillo of SB Nation writes (Twitter links). O’Flaherty is a client of MVP Sports Group.

The first three two and a half weeks of August yielded only a few minor trades, featuring pickups by the Mariners (Arquimedes Caminero and Pat Venditte), a swap of veteran infielders (Erick Aybar and Mike Aviles) and the Marlins adding some left-handed depth to their ’pen (Hunter Cervenka). Since that time, several names have changed hands, though, including Carlos Ruiz, A.J. Ellis, Dioner Navarro, Jeff Francoeur, Daniel Nava, Marc Rzepczynski and Erick Aybar. A trade sending veteran outfielder Coco Crisp to the Indians should be announced on Wednesday as well.

Before diving into the names, a few items bear repeating. The majority of Major League players will be placed on trade waivers this month, with most instances going unreported. There are undoubtedly players (quite a few of them, most likely) who have already cleared waivers but have not been reported to have done so. Players can be traded into September, as well, but only those traded on or before Aug. 31 will be eligible for the postseason with their new teams, so there’s some urgency for contending clubs to complete deals by month’s end. And, of course, for those who aren’t familiar with the inner-workings of waiver trades, MLBTR published a full explanation of how August trades work earlier this month. Onto the known names…

One final note: outfielder Jeff Francoeur (link) and catcher Carlos Ruiz (link) were both reported to have cleared waivers as well, but each has already been traded to a new team, with Francoeur going to the Marlins and Ruiz going to the Dodgers.

Royals right-hander Joakim Soria and Braves lefty Eric O’Flaherty have cleared revocable trade waivers, according to Jon Heyman of FanRag Sports. As such, either player is free to be traded to any other club.

That Soria, 32, went unclaimed is hardly a surprise considering the fact that he’s just four and a half months into a substantial three-year, $25MM contract signed as a free agent this offseason. Soria, though, has hardly performed like a $25MM pitcher, pitching to a pedestrian 4.03 ERA with 9.1 K/9, 3.7 BB/9 and a 52.9 percent ground-ball rate. While the strikeouts and grounders are impressive, Soria has demonstrated the worst control of any healthy season he’s had in his career this year and is allowing hard contact at a career-high rate of 29.3 percent, per Fangraphs. The frequency with which opponents are barreling up his offerings has led to a career worst 1.4 HR/9 rate.

Soria is earning $7MM this season in the first year of the slightly backloaded deal, meaning he still has $19.72MM remaining on his pact from now through the end of the 2018 season (including the buyout of a 2019 option). While his performance to date hasn’t been encouraging, the Royals may be able to find a taker if they’re willing to eat some of that contract, though they could also simply hope for a better performance in 2017. Soria is, after all, still missing bats and keeping the ball on the ground, as previously mentioned, and his 92.8 mph average heater is actually the best of his career.

The 31-year-old O’Flaherty is more affordable than Soria, with a $1.75MM base salary on the minor league deal he signed this winter, but his performance has been considerably worse. His ERA to date sits at a decidedly unappealing mark of 6.91, and while his 54 percent ground-ball rate is promising, his 22-to-11 K/BB ratio (plus two hit batters and three wild pitches) is less inspiring. While some might hope that O’Flaherty could at least be relied upon as a lefty specialist, he’s allowed same-handed opponents to bat .284/.329/.439 against him. The Braves were able to find a taker for Erick Aybar, so perhaps there’s hope that he could be moved, but even Aybar had a solid three or four weeks of production under his belt prior to being flipped (in a trade that saw the Braves take some salary back in the form of Mike Aviles). O’Flaherty has surrendered six earned runs in his past six innings, issuing more walks (six) than strikeouts recorded (five) in that time.

Injuries continue to be a problem for Athletics left-hander Rich Hill, who departed his start against Toronto on Sunday during the first at-bat of the game. Hill had to exit after the blister on the middle finger of his pitching hand popped, according to Susan Slusser of the San Francisco Chronicle. That blister pushed Hill’s start from Friday to Sunday. With the Aug. 1 deadline creeping up, scouts from several contenders were on hand to watch the 36-year-old trade candidate, as Slusser reported earlier Sunday. Durability is the big question with Hill, who hasn’t exceeded 100 innings in a season since 2007 and has already missed significant time this year with a groin injury. Hill has dominated while on the mound in 2016, though, with a 2.25 ERA, 10.66 K/9, 3.32 BB/9, 50 percent ground-ball rate and 14.5 percent infield fly ball mark in 76 innings. 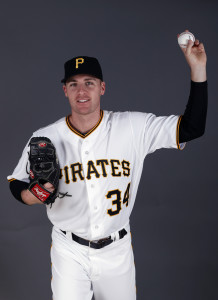 It has become cliche at this point, but the Bucs do have a record of helping to turn around once-productive pitchers. And O’Flaherty certainly fits the general mold of past refurbishment projects.

Things weren’t so rosy last year, his first full campaign back from Tommy John surgery. He ended with an abysmal 8.10 ERA, which only got worse after a mid-season trade from the Athletics to the Mets. And the peripherals weren’t great either, as O’Flaherty ended with 6.3 K/9 against 5.4 BB/9. He was able to generate grounders right at his career rate, and there are indications he suffered some bad luck (.388 BABIP, 57.6% strand rate), but clearly he has some work to do to get back on track in the coming spring.

Free-agent left-hander Eric O’Flaherty has narrowed his list of possible teams down to four and is “should sign a deal by the weekend,” reports ESPN’s Jerry Crasnick (on Twitter). The MVP Sports client recently threw for more than 15 Major League clubs.

O’Flaherty, who turned 31 on Friday, struggled through the worst season of his career in 2015, yielding 27 earned runs in 30 innings in his first full season back from 2013 Tommy John surgery. Those ugly results notwithstanding, O’Flaherty has an excellent track record as a setup man, having served as one of the Braves’ most reliable bullpen arms from 2009-13 before his injury. In that stretch, the left-hander turned in a 1.99 ERA with 7.2 K/9, 2.5 BB/9 and a 58.3 percent ground-ball rate across 249 1/3 innings. O’Flaherty was more than a lefty specialist during his Atlanta peak, as well, holding right-handers to a .247/.334/.335 batting line while stifling lefties (.188/.243/.255).

While O’Flaherty’s 2015 ERA is clearly discouraging, it should also be noted that the velocity on his sinker increased over the course of the season, and his 58.3 percent ground-ball rate was an exact match with his ground-ball rate from his best years with the Braves. Clearly, O’Flaherty will have to re-establish his once-solid control if he is to recreate the success that he once enjoyed, though. The 18 walks he issued in 2015 were just three shy of the single-season high he logged in that aforementioned stretch of five years.

In addition to O’Flaherty, teams seeking left-handed relief help have a number of options at this late stage in the offseason, including Neal Cotts, Franklin Morales and Matt Thornton.