The Cubs’ primary offseason goal is to add an impact starting pitcher.  They will also address center field, consider trades for surplus position players, and explore an extension for Jake Arrieta. 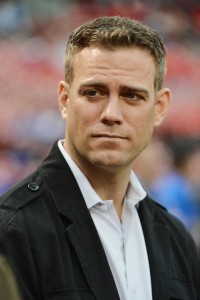 Expectations have been raised for the 2016 Cubs, after the club reached the NLCS for the first time in 12 years.  The team’s position player core has the potential to be in place for at least five more years.  Jorge Soler is under team control through 2020, while Anthony Rizzo, Kris Bryant, Addison Russell, Kyle Schwarber, and Javier Baez are under control through 2021.  At 26 years old, Rizzo is the elder statesman of the group.  Bryant, Russell, Schwarber, and Baez are years from arbitration, and Soler ($3MM) and Rizzo ($5MM) are also very cheap.  Theo Epstein and company have assembled something special and have lined the players up for sustained success.

Bryant’s rookie season defense suggests he’ll remain mostly at third base next year, although manager Joe Maddon dabbled with him at each outfield position and may continue to do so.  Rizzo is locked in at first base.  The veteran tandem of Montero and Ross will return at catcher.

The Cubs have a middle infield surplus.  Russell will remain the starting shortstop, so the question is what to do with Baez and Castro.  Both players were acquired under the Jim Hendry front office, though Epstein’s group brokered the extension with Castro in the summer of 2012.  Castro’s 2015 season was near replacement level, and he lost the starting shortstop job to Russell in August.  Partially because of an injury to Soler that forced Chris Coghlan back to the outfield, Castro became the starting second baseman in September and had a blistering month.  He continued in that role throughout the playoffs.

Castro won’t turn 26 until March, and he’s an enigma.  He tallied 529 hits from age 20-22, joining Alex Rodriguez as the only middle infielders to accomplish that feat in baseball history.  Since then he’s had replacement level seasons in 2013 and ’15, sandwiching a solid 2014.  The Cubs prefer Russell and Baez over Castro as defensive shortstops, so it’s unclear whether another team would install Castro at short.  He did show pretty well at second base late in the year.

If Castro became a free agent right now and demanded a four-year deal with a club option, I think he could get $38MM or a bit more.  So perhaps the Cubs could move him without eating salary, though they wouldn’t get a player back with much surplus value.  The Mets, Padres, White Sox, and Yankees could be potential trade partners for the Cubs, who would presumably look to add starting pitching.  Most of those teams have pitching depth, and the Cubs could look to add to their bullpen as well.

Baez, who turns 23 in December and comes with six years of control, is also a trade candidate.  He was able to cut his strikeout rate a bit in Triple-A this year, while dealing with the tragic passing of his sister as well as a broken finger.  Baez’s star potential gives him much more trade value than Castro, and it would be risky for the Cubs to move him.  The flip side of that is that making him available opens the door to controllable upper-tier arms like Carlos Carrasco and Tyson Ross, pitchers the Cubs pursued in July.  All in all, Castro is more likely to be dealt than Baez this winter, yet there is a reasonable chance the club enters the season with both and delays the trade decision.  Baez could serve as the team’s backup infielder to start the season.

Schwarber’s bat is well ahead of his glove.  He joined the Cubs in mid-June and clubbed 21 home runs in 304 plate appearances, including his postseason onslaught.  The plan remains the same for 2016: bring him along as a catcher when possible, while keeping his bat in the lineup as the left fielder.  Trading Schwarber at this point in his career would be an extremely bold move that I don’t anticipate the Cubs making.  Trading Chris Coghlan is a safer alternative.  He and Schwarber both bat left-handed, so they can’t form a left field platoon.  Coghlan remains affordable in his final year of team control, and he hit .264/.355/.476 against right-handed pitching this year.  I’m reminded of Seth Smith, who was traded to the Padres for Luke Gregerson two years ago.  The Angels, Astros, Giants, Orioles, Padres, Royals, and White Sox could be potential trade partners for Coghlan.

Though he’s cut from the same cloth as Baez, the Cubs could consider trading Soler for controllable pitching.  Soler posted a replacement level rookie season, with poor defense and a 30% strikeout rate.  His 112 total games played marked a pro career high.  Still, Soler flashed All-Star potential in the playoffs.  Like Baez, the safe move here is to retain Soler and see what he becomes.

With Schwarber and Soler penciled in at the outfield corners, center field is the Cubs’ clearest position of need.  Coming off the healthiest season of his career, Dexter Fowler is due a qualifying offer and perhaps a four-year contract in the $60MM range.  While the Cubs have the capacity to sign him, they may acknowledge that a four-year deal wouldn’t provide good value.  If Denard Span does not receive a qualifying offer and the Cubs aren’t scared off by his September hip surgery, he could be a cheaper replacement on a shorter term.  The Cubs have 2012 first-rounder Albert Almora working his way up the minor leagues, so a shorter-term investment makes sense.  Bringing Austin Jackson back is an option, or the Cubs could look into a trade for the Yankees’ Brett Gardner.  Epstein has named outfield defense as an area of improvement, which could mean exploring trades for players like Leonys Martin or Juan Lagares.

Despite some decisions to be made on the position player side, the Cubs’ offseason focus will be on their rotation.   The group is currently fronted by Jake Arrieta and Jon Lester.  After the season, Epstein spoke of his desire to add “impact pitching,” as well as big league depth.  He seems open to the “necessary evil” of free agency, and this year’s class is stacked with David Price, Zack Greinke, Johnny Cueto, and Jordan Zimmermann.  Jeff Samardzija could also be considered a potential impact arm.  Then there’s John Lackey, who Epstein signed as Red Sox GM six years ago. Greinke, Zimmermann, Samardzija, and Lackey would likely require the Cubs to forfeit their first-round draft pick.  The Cubs could make trade attempts for Carrasco, Ross, Jose Quintana, Sonny Gray, Matt Harvey, or Stephen Strasburg, though some of them will be off-limits and they come with varying amounts of team control.  In the end, expect the Cubs to come away with someone they’re comfortable starting in the first three games of a playoff series.

Hammel and Hendricks can capably fill out the back of the Cubs’ rotation.  Hendricks, 26 in December, won’t reach arbitration until after the 2017 season, and the Cubs could include him as part of a trade for a better pitcher like Ross.  Epstein’s mention of depth is important, as the club avoided major injuries in 2015.  They need to safeguard against possible injuries in 2016, especially with ace Jake Arrieta reaching 248 2/3 frames.  That means starting the year with at least six capable options.  Travis Wood could be stretched out if needed, but the Cubs should probably add two starters.

The Cubs assembled an interesting collection of relievers by the time the playoffs started, with a surprisingly heavy reliance on failed starters Wood, Trevor Cahill, and Clayton Richard along with Hector Rondon, Pedro Strop, and Justin Grimm.  Wood’s past as a starter will drive his arbitration price up to more than you’d like to pay, but he posted a 2.95 ERA and 11.0 K/9 in regular season relief and should be retained.  It’s unclear whether Cahill, 28 in March, will embrace a relief role as a free agent.  He was very good in that role for 22 1/3 innings after joining the Cubs, and the team should find a way to bring him back.

Perhaps in the new year, the Cubs will explore an extension for Arrieta.  A big factor is who they are able to acquire – if it’s David Price on a seven-year deal, the Cubs would seem unlikely to make Arrieta their third long-term $25MM+ pitcher.  If it’s two years of Tyson Ross, maybe there’s room for a huge deal for Arrieta.  We project Arrieta to make a big leap to a $10.6MM salary in arbitration for 2016, and then he’d be due another raise for 2017.  Signing him now could allow the Cubs to temper those two arbitration salaries, but it would be a question of how many years the pitcher would need on top.  Arrieta’s projected free agency begins with his age 32 season, and Scott Boras is his agent.  Zack Greinke’s new deal will also begin with his age 32 season.  Whatever Greinke gets for his free agent years, Boras will expect the same.  That could be $150MM over five years, $160MM over six, or something else, but we should know by January.  The Cubs have to ask the hard question of whether giving Arrieta ace money through age 36 or 37 is prudent, when they already control his age 30 and 31 seasons.

If the Cubs are already looking at $185MM or so over seven years to lock Arrieta up in January 2016, how much higher would the price be in January 2017?  Can the Cubs wait this year out to see how Arrieta’s arm holds up after all the added innings, or will the window to extend him be mostly closed by that point?  If a long-term deal can’t be reached, the Cubs could at least gain cost certainty by signing Arrieta to a two-year deal.

In 2015, Joe Maddon’s Cubs got close enough to taste their first World Series in 70 years before running into the Mets buzzsaw in the NLCS.  The Cubs were playing with house money with a lot of fans this year, as many perceived this club to be a year early.  Now, the team will hike ticket prices and add to the payroll to assemble a playoff-caliber rotation to complement their exciting young position players.