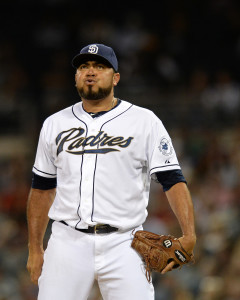 The 38-year-old Benoit, presumably, will serve as a ninth-inning option for rookie manager Scott Servais in Seattle. The Padres recently exercised a $7.5MM option on Benoit for the 2016 season, after which he’ll be a free agent.

Benoit is coming off yet another excellent season spent as a late-inning weapon, having logged a 2.34 ERA with 8.7 K/9 against 3.2 BB/9 and a career-best 46.3 percent ground-ball rate. Despite his advanced age, Benoit averaged better than 94 mph on his fastball for the third consecutive season while notching a 16.5 percent swinging-strike rate that was 6.6 percent better than the league average. Dating back to 2010, Benoit has a clean bill of health and has averaged 63 innings/65 appearances per season, working in mostly a setup capacity but also serving as the Tigers’ primary closer in 2013.

Peripheral ERA indicators such as FIP, xFIP and SIERA are less optimistic than Benoit about his gaudy ERA totals over the years, and 2015 was no exception. However, Benoit has proven over the last several seasons to be able to sustain a BABIP that is well south of the league average and a strand rate that is significantly higher than that of an average pitcher.

The Padres will add a pair of minor leaguers to their system and save the $7.5MM they probably didn’t want to spend on Benoit in the first place given the escalating salaries around the rest of the payroll and the more affordable in-house options they had for the setup role (MLB.com’s Corey Brock tweets that Kevin Quackenbush, Jon Edwards and Brandon Maurer will be leaned on, and the team could look for external setup options as well, particularly if Maurer is converted back to the rotation). However, GM A.J. Preller correctly assessed that the Padres could receive some future value by exercising the option and trading Benoit. While neither De Los Santos nor Ward are premium prospects, the duo does give the Padres additional upside and depth in its farm system.

De Los Santos, 19, was one of the better prospects in a weak Mariners farm system, tweets Baseball America’s Ben Badler, and BA recently rated him as the 15th-best prospect in the short-season Class-A Northwest League. De Los Santos logged a 4.06 ERA with an encouraging 10.0 K/9 mark against 3.1 BB/9 in 37 2/3 innings (eight starts) this past season. De Los Santos features a 93 to 95 mph fastball that touches 97 mph, per BA. He also has an average curveball and a changeup that occasionally looks like a plus pitch but needs further refinement in addition to good control. At 6’3″, he’s tall enough to add some weight to the 170 pounds at which he is currently listed.

Ward, 23, was Seattle’s 12th-round pick out of the University of Georgia in the 2014 draft. He split the 2015 season between Class-A and Class-A Advanced, batting a solid .278/.365/.436 with nine homers and 13 steals across the two levels. He spent most of his time at second base and at third base, though he did log five games at shortstop this season and 31 games there in 2014.

The Benoit trade marks Dipoto’s second significant trade of the young offseason, as he’s already picked up right-handed starter Nate Karns, lefty reliever C.J. Riefenhauser and outfield prospect Boog Powell in a six-player deal with the Rays. The Mariners have also re-signed Franklin Gutierrez and are said to be in discussions with free-agent catcher Chris Iannetta regarding a contract.

Ken Rosenthal of FOX Sports reported seconds before the announcement that Benoit was headed to Seattle (via Twitter).