The Athletics and Padres have announced a deal that will send first baseman Yonder Alonso and southpaw reliever Mark Rzepczynski to Oakland in exchange for lefties Drew Pomeranz and Jose Torres. There’s also a player to be named later heading to San Diego. 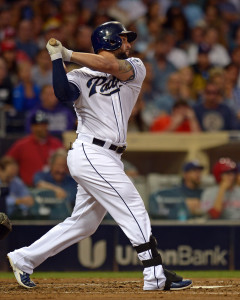 This deal is clearly motivated in large part by today’s non-tender deadline, as it involves several pieces with arbitration implications. MLBTR projects Alonso to earn $2.5MM in his second-to-last season of eligibility and Rzepczynski to take home $3MM in his pre-free agent campaign. Pomeranz, in turn, projects at $1.3MM as a first-year-eligible player.

By adding Alonso, moreover, the A’s now seem all but certain to move on from fellow lefty-swinging first baseman Ike Davis, who is projected for a $3.8MM salary but will likely end up a free agent. Presumably, Alonso will pair with the right-handed-hitting Mark Canha in a first base platoon. The 28-year-old Alonso has never quite lived up to expectations in San Diego, and the power has never really come around, but he does have excellent on-base abilities. He put up a .282/.361/.381 slash in 402 plate appearances last year.

In Rzepczynski, meanwhile, Oakland adds another pen piece as the team continues to bolster its relief corps. The 30-year-old put up an unsightly 5.66 ERA last year, but that could well have been the product of some ill fortune, as reflected in a .381 BABIP-against and 25% HR/FB rate. He posted a strong 10.5 K/9 against 3.6 BB/9 while generating a ridiculous 67.3% groundball rate, and ERA estimators valued him as a much stronger contributor than the results suggested.

On the Padres’ side of the deal, Pomeranz has emerged as a solid swingman option since coming to Oakland before the 2014 season. Last year, he tossed 86 innings (including nine starts) and posted a 3.66 ERA with 8.6 K/9 against 3.2 BB/9. Pomeranz was much more effective against lefties than righties last year, but he came up as a starter and could certainly be given a chance to operate from the rotation for San Diego. Though he did just undergo a shoulder procedure, the 27-year-old is reportedly expected to be ready to go when camp opens.

Meanwhile, though the 22-year-old Torres only cracked the High-A level late last year, he was just added to the 40-man roster to protect him from the Rule 5 draft. Baseball America’s J.J. Cooper tweets that Torres works into the mid-nineties with his fastball and has made strides with controlling his secondary offering (a curve).

ESPN.com’s Keith Law reported the major pieces of the deal on Twitter. Susan Slusser of the San Francisco Chronicle reported that the deal was done (via Twitter).