WEDNESDAY: The Mets and left-hander Antonio Bastardo are in agreement on a contract, reports Jon Heyman (Twitter link). It’s a two-year, $12MM contract, according to Baseball Essential’s Robert Murray (on Twitter). Bastardo is represented by the Legacy Agency. 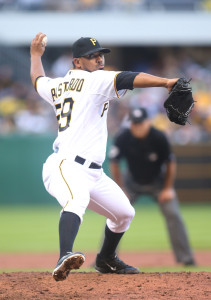 Murray reported yesterday that things were picking up in the Bastardo market, though the three-year deal mentioned in that report ultimately wasn’t attained. The two-year pact represents a departure from the Mets’ previously reported plans, as the team was said earlier this month to be seeking relief help on a one-year deal. In that regard, the agreement between the two parties represents a compromise, as Bastardo was said to be seeking a three-year deal in the $18MM range (similar to the one Tony Sipp landed with Houston earlier this year).

Bastardo, 30, has turned in generally strong results across the past three seasons between the Phillies and Pirates, working to a 3.18 ERA with 10.5 K/9, 4.4 BB/9 and a 30.8 percent ground-ball rate in 164 innings of work. He’s dominated left-handed opponents in that stretch, holding same-handed batters to a paltry .167/.273/.295 triple-slash. However, Bastardo is more than a specialist, as he’s also been plenty effective against right-handed batters, limiting such opponents to a .204/.310/.314 line. As such, he can be deployed as a setup man, regardless of matchup, alongside Addison Reed and Jenrry Mejia. That trio, of course, will help bridge the gap from the club’s excellent young rotation to breakout closer Jeurys Familia, who saved 43 games for the Mets in 2015.

With Bastardo in the fold, the Mets will now have a wealth of quality left-handed options for manager Terry Collins to utilize. The team re-signed Jerry Blevins this offseason, and he’ll look for better health after twice fracturing his forearm in a pair of fluky accidents in 2015. Sean Gilmartin, whom the Mets selected in the 2014 Rule 5 Draft, enjoyed a brilliant season with New York, recording a 2.67 ERA in 57 1/3 innings in his Major League debut. And southpaw Josh Edgin, who missed the 2015 campaign in the wake of Tommy John surgery, will likely be ready to return to a big league mound at some point during the 2016 season as well.

The Mets deserve some praise for waiting out what was an exceptionally aggressive relief market in the earlygoing this offseason. Five relievers scored contracts of three or more years in the earlier phase of the offseason, and many — we at MLBTR included — believed Bastardo would find such a pact as well. However, while his average annual value is commensurate with many of the multi-year deals given to setup men this winter, the Mets’ patient approach allowed them to knock a year off the price in the end.

Bastardo drew interest from a number of teams, including the Orioles, Dodgers, Pirates, Blue Jays and Twins, per various reports this offseason. With his departure from the open market, teams could turn to one-year deal candidates such as Neal Cotts, Franklin Morales and Matt Thornton as they look to supplement their bullpens with left-handed relievers.