Major League Baseball has released the final draft bonus slots to teams, and MLB.com’s Jim Callis provides the figures. As he explains, and the attached table reflects (mobile link), the Reds have the highest total draft spending power and are one of five clubs with over $10MM in bonus pool money. 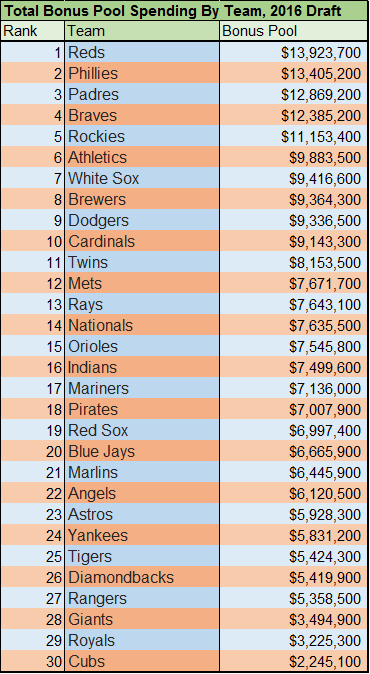 Having the largest amount of cash to distribute is one thing, but teams still need to be able to put it to strategic use. Last year, the Astros showed the power of the pool money by convincing Daz Cameron to convince other teams he was uninterested in signing because Houston had a big bonus sitting for him (ultimately, $4MM) with the 37th pick. The Diamondbacks, meanwhile, left a significant portion of their total spending capacity untapped, though senior VP DeJon Watson explained that the club got the players it wanted and also felt it would have been difficult to get a player to wait until the 43rd selection (Arizona’s second pick).

In that regard, the volume of top selections matters, too, because it increases an organization’s flexibility — especially as the always fluctuating draft board begins to unfold. The Phillies don’t make their second choice until the first pick of the second round, while the Reds sit at 35th.

In terms of actual bonus allocations for each pick, you’ll need to check out the full piece from Callis to see all of the first ten rounds. But we’ve compiled a table for the first round, at right (mobile link).

Other teams stand out with interesting early pick combinations, including the White Sox (#10, #26); Cardinals (#23, #33, #44); and Dodgers (#20, #32, #36). While it’s certainly possible to simply take the best players on the board and sign them for close to the pool money, these are among the organizations that will have more elbow room to pursue creative combinations.

If you’re in need of a refresher for how draft bonus caps work, MLBTR’s Steve Adams has broken things down, making clear why teams have never yet gone more than 5% past their spending allotment. As Steve wrote:

All bonus money directed toward a player selected in the Top 10 rounds of the draft counts against a team’s bonus pool, as does any bonus money that exceeds $100K to players selected in rounds 11 through 40 (for example, a $180K bonus to a team’s 11th-round pick would result in $80K being removed from its draft pool). As a reminder, the penalties for exceeding draft bonus pools are as follows: