6:23pm: O’Brien adds further details in a full column on the situation, most notably that Gonzalez’s dismissal took an awkward turn on Monday evening. O’Brien reports that Gonzalez actually learned of his firing last night when he received an email confirming a Tuesday afternoon flight from Pittsburgh to Atlanta, despite the fact that the the Braves’ four-game series with the Pirates runs through Thursday. The Braves weren’t planning on informing Gonzalez of the decision until Tuesday morning, when president of baseball operations John Hart had planned to fly to Pittsburgh to join GM John Coppolella to break the news go Gonzalez in person. Instead, Atlanta officials had to confirm to Gonzalez last night that the decision had been made.

11:45am: The Braves have brought an end to the speculation by officially firing manager Fredi Gonzalez, as David O’Brien of the Atlanta Journal-Constitution was first to report (Twitter link). Gonzalez becomes the first skipper to lose his post this year.

Atlanta has named Brian Snitker as an interim skipper, as MLB.com’s Mark Bowman reported via Twitter. He is expected to keep the position through the end of the 2016 season, ESPN.com’s Jerry Crasnick tweets. Long the Braves’ third base coach, Snitker had been managing the club’s top affiliate, Triple-A Gwinnett, since 2014. Atlanta has also fired bench coach Carlos Tosca, Bowman adds on Twitter. Terry Pendleton will take over his duties, with Eddie Perez moving to the first base coach job and Marty Reed becoming bullpen coach. 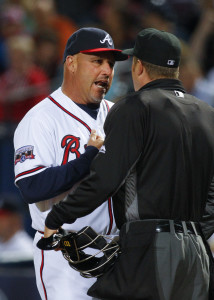 Gonzalez has long been rumored to be on shaky ground, and the organization finally pulled the plug after last night’s loss to the Pirates. Atlanta never expected to contend in 2016, but the team also certainly expected better than its brutal 9-28 start to the season.

The 52-year-old skipper has seen good and bad times with the Braves, but it’s been much more of the latter of late. He was at the helm from 2011-13, racking up 279 regular season wins against 207 losses. Things went south from there, as the Braves fell shy of expectations in 2014 and haven’t sniffed .500 since.

Of course, even when the club was in position to contend, there were plenty of disappointments. While it bounced back from an epic collapse late in 2011, the 2012 team lost in controversial fashion in the Wild Card play-in game after the Nationals ran away with the division. The Gonzalez-led Braves rebounded to take the NL East in 2013, but were bounced by the Dodgers in the first round of the postseason. And a late-season collapse doomed the otherwise-competitive 2014 iteration, spurring greater organizational change.

Gonzalez previously managed the Marlins, but he was let go in the middle of 2010. He had risen through that organization as a coach and manager after never moving above the Double-A level as a player.

It appears that Atlanta will not undertake a search for a permanent replacement during the present season, instead rolling with Snitker for the time being. It seems likely, though, that the Braves will at least begin a soft hiring search sooner rather than later in order to get a jump on the market. That being said, it’s worth noting that the division-rival Phillies ended up installing their own mid-season interim replacement, Pete Mackanin, on a long-term basis.

It certainly doesn’t help the Braves that the Mackanin-led Phils are off to a surprisingly winning (albeit questionably sustainable) start to 2016. If anything, the hope was that Atlanta might overplay projections a bit, with the organization installing numerous bounce-back veterans and possessing numerous young pitchers at and near the majors. With a new park set to open next year, there was at least some possibility that a solid campaign could allow the team to ramp up toward contention as soon as 2017.

Instead, the Braves will keep pushing on with a tough rebuilding process that began in earnest with the firing of GM Frank Wren in September of 2014. John Hart took over as the club’s president of baseball operations, eventually passing on day-to-day general managing duties to young executive John Coppolella. That pair has engineered several bold trades, stockpiling youthful talent in exchange for veterans.