The Brewers are promoting top prospect Orlando Arcia prior to today’s game, the team announced overnight. Rays outfielder Oswaldo Arcia — Orlando’s older brother — first suggested as much by welcoming his younger brother to the Majors on Instagram. 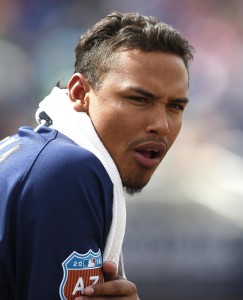 Arcia, 21, will take over as the Brewers’ shortstop, as MLB.com’s Adam McCalvy writes, thereby pushing Jonathan Villar over to third base. Arcia ranked seventh, 13th, 14th and 16th on the respective midseason rankings of the game’s top overall prospects from Baseball Prospectus, MLB.com, Baseball America and ESPN. Arcia draws huge amounts of praise for his defense at shortstop, his speed and his hit tool, giving him the potential to be a top-of-the-order hitter with Gold Glove caliber defense at a premium position if all pans out. He hasn’t exactly forced his way onto the roster with outstanding play at the Triple-A level like many top-tier prospects do, as he’s batted a modest .267/.320/.403 in a very hitter-friendly environment (the Pacific Coast League’s Colorado Springs). He’s extremely young to already have spent several months in Triple-A, though, and his perhaps underwhelming 2016 results clearly didn’t cause him to slip down prospect rankings much.

“The thinking is it’s time to get him started,” manager Craig Counsell tells McCalvy. “We’ve still got [58] games left, a good chunk of the season left, where we’re hopeful that it gives him good experience going into next year. I think it’s a little shot in the arm for us, a little boost for us, as well.”

If he’s in the Majors for good, Arcia will accrue 62 days of big league service in 2016 and fall well shy of Super Two status down the line. He currently projects to be controllable through the 2022 season and wouldn’t be eligible for arbitration until the completion of the 2019 campaign.