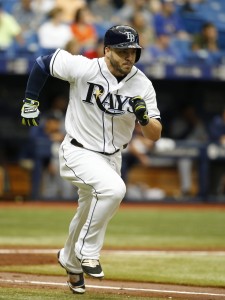 Pearce, 33, had a successful run with Baltimore from 2013-15 before signing with Tampa Bay on a one-year free agent deal.  He’s owed about $1.6MM for the rest of the season, plus incentives once he reaches 400 plate appearances.  Pearce, a right-handed hitter, has an excellent .309/.388/.520 line in 232 plate appearances on the season.  He’s done a lot of damage against lefties, crushing five home runs and four doubles in just 63 plate appearances.  For the Rays, Pearce has mostly served as a first baseman, second baseman, and designated hitter.  He’s played the outfield as well, and Orioles executive vice president of baseball operations Dan Duquette said today on MLB Network Radio that the veteran’s versatility will allow the club to carry an extra pitcher.  You can check out the Orioles’ updated depth chart here.

Heim has struggled offensively at High-A this year, hitting .216/.300/.344 in 329 plate appearances.  MLB Pipeline ranked him 13th among Orioles prospects, praising his defense and makeup.  The Rays will hope the switch-hitting Heim progresses offensively in the coming years.  The Rays made two additional trade deadline deals today, sending Matt Moore to the Giants and Brandon Guyer to the Indians.