NOV. 21: The Cardinals have formally announced Cecil’s four-year deal and introduced him at a press conference.

NOV. 19: The Cardinals have agreed to a four-year deal with southpaw reliever Brett Cecil, Yahoo Sports’ Jeff Passan reports (Twitter link).  The deal will pay Cecil $30.5MM over the four seasons and includes full no-trade protection, according to FOX Sports’ Ken Rosenthal (Twitter links).  The contract will be official when Cecil, an ACES client, passes a physical.

St. Louis was known to be interested in bullpen help this winter, and adding another left-hander was the more logical fit, as Kevin Siegrist was the only other healthy southpaw in the Cards’ bullpen.  Tyler Lyons will miss at least the start of the 2017 season due to knee surgery, while Zach Duke will miss next season entirely after undergoing Tommy John surgery.

In Cecil, the Cardinals have landed one of the top setup men on the market this winter.  In four years as a full-time reliever, Cecil posted a 2.90 ERA, 11.5 K/9 and 3.68 K/BB rate with the Blue Jays, with grounder rates of over 50% in three of those four years.  Over his career, Cecil has dominated left-handed hitters, limiting them to just a .226/.281/.344 slash line. 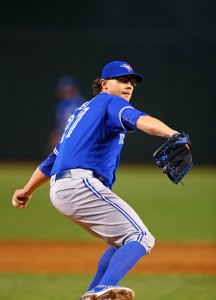 Despite this solid track record, the thought of Cecil landing a four-year deal seemed pretty remote in mid-July.  The lefty missed six weeks due to a tear in his lat muscle, and he had a whopping 6.75 ERA over his first 16 innings of action.  Down the stretch, however, Cecil looked far closer to his old self, posting a 1.74 ERA over his final 20 2/3 innings of the year.

MLBTR’s Tim Dierkes ranked Cecil 26th on his list of the winter’s top 50 free agents, and projected him to land a three-year, $18MM contract.  The fact that Cecil ended up with a fourth year and $30.5MM in guaranteed money is both a nice win for his representatives at ACES and a sign of just how far the Cards had to go to win the bidding.  The Mariners and Blue Jays were both known to be interested in Cecil’s services, with Toronto reportedly putting a three-year deal on the table to retain their longtime reliever.  Sportsnet’s Ben Nicholson-Smith reports that the Jays were one of multiple teams willing to give Cecil a three-year commitment.