The Cubs are in agreement with free-agent outfielder Jon Jay on a one-year, $8MM contract, according to Mark Gonzales of the Chicago Tribune (Twitter link). The team has now announced the signing as well. Jay, 32 next March, is a client of CAA Sports. 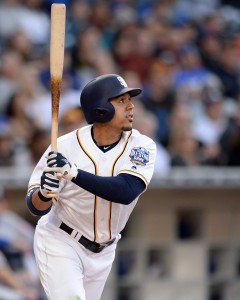 Jay missed nearly two months of the 2016 season with a broken forearm that was sustained when he was hit by a pitch, but he was productive when he was healthy enough to take the field. The longtime Cardinals center fielder batted .291/.339/.389 with a pair of homers and 26 doubles in 374 trips to the plate. Jay was leading the National League with 24 doubles at the time he sustained his injury, batting .296/.345/.407 to that point in the season, but he tallied just three extra-base hits over his final 84 plate appearances upon returning from the disabled list.

With Jay in the fold, it now seems likelier than ever that Dexter Fowler’s time with the Cubs has drawn to a close. Jay joins an outfield contingent that also includes Kyle Schwarber, Ben Zobrist, Jorge Soler, Jason Heyward, Albert Almora Jr. and Matt Szczur. He’ll bring a left-handed bat that doesn’t have a significant platoon split to manager Joe Maddon’s roster and will pair well with the highly touted but inexperienced Almora, a right-handed hitter, in center field. Both Gonzales and CSN Chicago’s Patrick Mooney suggest that Jay will be paired with Almora in center field (Twitter links). Alternatively, Almora, who has just 80 games at the Triple-A level in his career, could get some additional seasoning in Iowa if it’s deemed necessary in Spring Training.

The addition of Jay gives manager Joe Maddon even more matchup options with his day-to-day lineup, and it also gives the Chicago front office more options to pursue on the trade market this winter. Addison Russell and Javier Baez look to have cemented themselves as the Cubs’ regular middle-infield duo, which should push Zobrist to the outfield more often than not. It’s also conceivable that Schwarber will do some catching for the Cubs again in 2017, freeing up some corner outfield at-bats on those days. Nonetheless, it certainly seems plausible that the Cubs could look to deal from their outfield surplus this winter. Soler has long stood out as a possible trade candidate, and the addition of yet another outfield bat to the mix further frees up president of baseball operations Theo Epstein and general manager Jed Hoyer to explore trade scenarios involving the former top prospect.

The exact machinations of the Cubs’ 2017 lineup can’t yet be determined, but as the 2016 team illustrated, cultivating this level of depth at the Major League level can prove vital in the event of a significant injury to a key player, as was the case when Schwarber suffered a pair of torn knee ligaments.