9:49am: Edwin Encarnacion, too, is rejecting his QO, tweets SB Nation’s Chris Cotillo. That was among the most obvious calls in the entire class (or in any class of QO players). On the heels of a .263/.357/.529 batting line and 42 homers — his fifth straight season with at least 34 round-trippers — Encarnacion figures to cash on a substantial four-year pact and has a chance at a five-year deal worth in excess of $100MM. If both Encarnacion and Bautista sign elsewhere, the Jays will net a pair of compensatory picks in next year’s draft.

8:46am: Blue Jays right fielder/DH Jose Bautista will decline Toronto’s one-year, $17.2MM qualifying offer before today’s 5pm ET deadline, tweets Jon Heyman of FanRag Sports. That decision has long been viewed as likely even on the heels of a disappointing and injury-filled season for the 36-year-old slugger. In light of Bautista’s decision, the Jays will receive a compensatory draft pick at the end of the first round if he signs elsewhere. 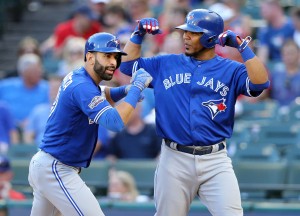 Bautista spent roughly six weeks of the 2016 season on the disabled list due to a toe injury and a knee sprain. When healthy, the two-time MLB home run leader (2010, 2011) batted just .234, though his .366 on-base percentage, .452 slugging percentage and .217 isolated power mark were all considerably above the league average. Bautista walked at nearly a 17 percent clip and struck out in just a shade under 20 percent of his plate appearances, and he finished the year on the upswing, hitting .262/.401/.469 in 162 plate appearances after being activated from his second stint on the DL.

The most significant questions surrounding Bautista are his age and his defense in right field. Having just turned 36 in October, a significant multi-year deal would carry him into at least his age-38 season. While that’s certainly not unheard of — Carlos Beltran, for instance, just played out a three-year, $45MM deal that spanned his age-37 through age-39 seasons — there will certainly be teams that are wary about committing to such pacts for a player that’s closer to 40 than to 30. Beyond that, his defense has rated out quite poorly in each of the past two seasons; Ultimate Zone Rating pegs him at 15.5 runs below average over his past 1825 innings in right field, while Defensive Runs Saved has him at -11 in that same time frame.

Those factors will likely scare away numerous National League clubs, although since formally receiving the qualifying offer, Bautista has already drawn some level of interest from the Mets. He’s also been loosely linked to both the Red Sox and Yankees, and it stands to reason that other American League teams will at least kick the tires on Bautista, who has hit more home runs than anyone in baseball dating back to the 2010 season. The Blue Jays may yet express interest in retaining Bautista, although their three-year deal with Kendrys Morales, signed last Friday, certainly makes him a bit of a tougher fit on Toronto’s roster.