The White Sox have officially agreed to a one-year deal with free-agent starter Derek Holland that pays him a reported $6MM. The 30-year-old southpaw, a client of Martini Sports Management, can also earn $2MM in incentives, $1MM apiece upon reaching 150 and 200 innings pitched. 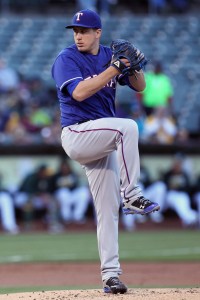 Holland hit the open market when the Rangers declined an $11MM club option, preferring instead to pay a $1.5MM buyout when trade talks did not result in a taker. Now, he’ll head to Chicago to function as a near-term rotation piece to step into the opening created when the team dealt ace Chris Sale to the Red Sox.

Certainly, Holland won’t be expected to produce anything like the output of Sale, one of the game’s best starters, but he offers a bit of upside in his own right. He’ll ultimately land the exact guarantee predicted by MLBTR’s Tim Dierkes, who listed Holland 50th in his pre-offseason ranking of free agents in terms of earning power.

It has been a tough and injury-riddled three-year run for Holland, who has managed to provide only 203 innings since the start of 2014. He hasn’t exactly been dominant when healthy, either, posting a 4.30 ERA with 5.9 K/9 against 2.5 BB/9 in that span.

That was certainly not what he or the Rangers hoped for when the sides came together on a five-year, $28.5MM deal in the spring of 2012. After a tough first campaign under the new pact, Holland came through in 2013 with a 213-inning, 3.42 ERA gem of a year in which he compiled 8.0 strikeouts against 2.7 free passes per nine innings pitched.

Things began to turn south in the following season, however, as knee and shoulder issues intervened. While Chicago can certainly hope for a bounceback, it will most likely be expecting some solid frames from the veteran hurler. In 2016, he sat nearly three full ticks below his peak average velocity (93.4 mph, in 2013), with a 7.8% swinging-strike rate that fell well below the ~10% mark he carried when at his best.

Given the limited commitment, and Holland’s positive clubhouse reputation, it seems to be a sensible acquisition for a White Sox organization that is hoping to remain somewhat competitive even as it deals away some of its best assets for upper-level prospects. If Holland can stay healthy and restore some of his prior luster on the hill, it’s conceivable that he could turn into a deadline trade piece or even a qualifying-offer candidate next fall.