JANUARY 11: Plouffe is expected to receive around $5MM of guaranteed money in the deal, per Jon Heyman of Fan Rag (via Twitter). There are also incentives, though details remain unknown.

JANUARY 10: The Athletics have an agreement in place with free agent infielder Trevor Plouffe, reports Ken Rosenthal of FOX Sports (via Twitter). The deal, which is pending a physical, will be a one-year agreement, per Susan Slusser of the San Francisco Chronicle (Twitter links). She adds that Plouffe is likely to see the bulk of the playing time at third base for the A’s next season, with Ryon Healy shifting to designated hitter and first base. Plouffe is represented by CAA Baseball.

Prior to this new deal with the A’s, the 30-year-old Plouffe had spent his entire career in the Twins organization. A first-round pick by Minnesota back in 2004, Plouffe took quite some time to blossom into an everyday Major Leaguer but cemented himself as the Twins’ everyday third baseman beginning in 2012. That season saw Plouffe belt 24 homers in 119 games, and while that mark still stands as a career-best, Plouffe has consistently shown solid pop from the right side of the plate over the life of his big league career.  In his first four seasons as a regular, he proved to be a roughly league-average bat, hitting .248/.312/.426 and averaging 23 homers per 162 games played. A right-handed hitter, Plouffe has been significantly more productive against lefties (career .268/.344/.465) than righties (.239/.294/.403). 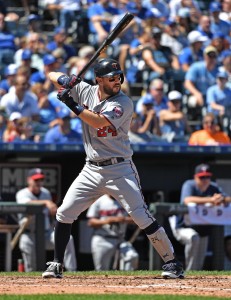 This past year, Plouffe hit .260/.303/.420 with 12 homers in an injury-ravaged season that included three trips to the disabled list for an intercostal strain, a fractured rib and an oblique strain. Those three maladies combined to limit Plouffe to just 84 games and 344 plate appearances — both his lowest marks since establishing himself as a regular with the Twins. The three trips to the DL, Plouffe’s projected $8.2MM price tag in arbitration (courtesy of MLBTR contributor Matt Swartz) and a stacked corner infield/DH scene in Minnesota prompted the new Twins front office to part ways with Plouffe following the season rather than tender him a contract in arbitration.

Despite possessing fairly notable platoon splits, it seems that Plouffe will be in line for near-everyday at-bats, as was the case during his tenure with the Twins. Plouffe never rated as an exceptional defender at the hot corner, but the converted shortstop went from dreadful Defensive Runs Saved and Ultimate Zone Rating marks to above-average grades over the course of his time in Minnesota as he grew more accustomed to his new position. (His 2016 defensive metrics were poor, though certainly one can imagine his persistent injuries impacting his mobility on the field.)

Plouffe also reportedly drew interest from the Red Sox, Braves and Royals, and he was speculatively linked to the Marlins as well. Instead, he’ll opt for a homecoming of sorts, returning to his home state (albeit a few hundred miles north of his Los Angeles area roots) and a presumably larger role as he takes aim at a healthier season in 2017.