A busy offseason for the Rays continued on Monday, as the team formally announced that it has signed free-agent outfielder Colby Rasmus to a one-year contract. The Excel Sports client will reportedly receive a $5MM guarantee on a contract that can reach $7MM in total if the built-in incentives are maxed out.

Rasmus, 30, hit just .206/.286/.355 last year for the Astros after accepting a qualifying offer following the 2015 season. He’s coming off of surgeries for a cyst in his ear as well as hip and core muscle ailments — which might help explain his fall-off. Certainly, a .257 BABIP might also have been to blame. 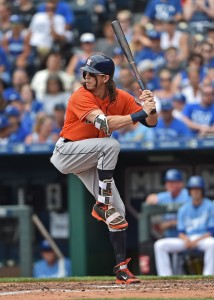 Houston extended the QO after Rasmus turned in an excellent year on a make-good contract. In 2015, he put up a .238/.314/.475 slash and 25 long balls over 485 plate appearances. That was the third-straight season in which Rasmus had hit at an above-average rate, and he averaged 22 dingers annually over that three-year run.

While the Rays will no doubt hope for a return to form at the plate, there’s also potentially some value to be found in Rasmus’s glove and legs. He has at times drawn strong defensive reviews, especially last year, and has typically drawn well-above-average grades on the basepaths despite the fact that he doesn’t often attempt to steal.

For Tampa Bay, Heyman notes, Rasmus will represent a power lefty bat capable of slotting in at DH, left field, and even center field on occasion. Rasmus has long carried rather hefty platoon splits, so he’s likely best suited for part-time duty. The Rays could utilize him in some form of rotation with players such as the right-handed hitting Steven Souza and Mikie Mahtook, lefties Corey Dickerson and Brad Miller, and the switch-hitting Nick Franklin. Though the regular center fielder, Kevin Kiermaier, is also a southpaw swinger, Rasmus has spent much of his career playing up the middle.

The Rays have also been connected, at least loosely, to a variety of right-handed hitters, including veteran slugger Jose Bautista. It isn’t known at this point whether adding Rasmus will preclude the club from pursuing one of the various first base/DH types still floating around on the market, but it’s certainly possible to imagine multiple acquisitions if the price is right. Tampa Bay is also still reportedly engaged with other organizations about their surplus of capable rotation arms.

The market was somewhat slow to develop for Rasmus, who never drew strong links to other organizations after Houston replaced him early on by signing Josh Reddick. With Rasmus now off the board, the top left-handed-hitting outfielders still available on the open market are Michael Saunders and Brandon Moss, each of whom ranked among MLBTR’s top 50 free agents. (Rasmus drew honorable mention consideration on that list.)