TODAY: Milwaukee has announced the swap, making it official.

YESTERDAY: The Brewers and White Sox have reportedly agreed to a trade that will send right-handed reliever Anthony Swarzak from Chicago to Milwaukee in exchange for 25-year-old infield/outfield prospect Ryan Cordell. 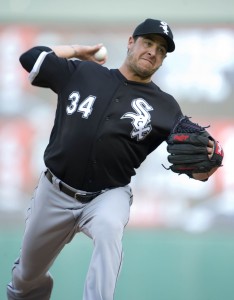 The former second-round pick is averaging 94.5 mph on his heater this year and has posted a 14 percent swinging-strike rate that dwarfs his previous career-high of 10.6 percent. Swarzak’s 71.9 percent contact rate sits nearly six percentage points below the league average of 77.5 percent.

Swarzak figures to serve as a setup man to breakout closer Corey Knebel. He’ll be joined in the relief corps by the likes of Jacob Barnes, Jared Hughes and Josh Hader. Veteran Carlos Torres and midseason acquisition Oliver Drake have both logged significant innings out of the Milwaukee ’pen, though each righty has struggled recently.

Cordell, 25, has spent the season with Milwaukee’s Triple-A affiliate, hitting .284/.349/.506 with 10 homers and nine steals in the hitter-friendly environment of Colorado Springs. He’ll ultimately spend less than a full season in the Brewers’ system, as he’d previously been acquired as the player to be named later in last summer’s Jonathan Lucroy/Jeremy Jeffress trade with the Rangers.

The versatile Cordell ranked 17th among Milwaukee farmhands on the updated top 30 list published by MLB.com today. A former 11th-round pick, Cordell has appeared at shortstop, third base and all three outfield positions in his career and could project as a super-utility option with some pop and speed in the Majors. While some scouts may project him as a fourth outfielder (as MLB.com’s report indicates and as Yahoo’s Jeff Passan suggests on Twitter), Cordell is essentially a very near-MLB-ready piece and should have a chance to convince the ChiSox that he’s capable of more in the very near future.

Swarzak becomes the latest domino to fall in the White Sox’ aggressive, ongoing rebuilding effort. Chicago GM Rick Hahn has moved Jose Quintana, Todd Frazier, David Robertson and Tommy Kahnle this summer, in addition to shipping out center fielder Adam Eaton and ace Chris Sale this past offseason. There could still be more pieces on the move in Chicago as well, with Melky Cabrera, Miguel Gonzalez and Derek Holland all set to hit free agency at season’s end. Outfielder Avisail Garcia, too, could see his name bandied about the rumor circuit over the next five to six days, as he’s only controlled through the 2019 campaign.