9:33pm: The teams have announced the trade. Philadelphia is sending Kendrick and cash to the Nats in exchange for Mills and additional international bonus money.

9:23pm: The Nationals have struck a deal to acquire infielder/outfielder Howie Kendrick from the Phillies in exchange for minor league left-hander McKenzie Mills, reports PhillyVoice.com’s Ryan Lawrence (Twitter links). Ken Rosenthal of MLB Network first reported that the Nats were working on a deal to land Kendrick (on Twitter). 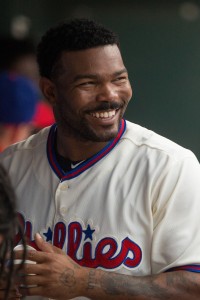 The 34-year-old Kendrick hasn’t had his healthiest season, but he’s been extremely productive when on the field. Through 156 plate appearances, he’s posted a brilliant .340/.397/.454 batting line with a pair of homers, eight doubles, a triple and eight steals (in 11 attempts). Once a pure second baseman, Kendrick took on more of a super utility role with the Dodgers in 2016 and has played corner outfield with the Phillies in 2017. Over the past two seasons, he’s spent time at second base, third base, first base and in left field.

Kendrick is earning $10MM this season, though $5MM of that is deferred until 2019, per Cot’s Contracts. The Phillies are paying Kendrick’s contract down to the pro-rated league minimum, tweets Chelsea Janes of the Washington Post, so the Nats are only taking on the hook for about $187K for Kendrick, who will hit free agency following the 2017 season.

The Nationals are banged up at the moment, with left fielder Jayson Werth, Michael Taylor, Ryan Raburn and Chris Heisey all on the disabled list. That’s pushed Brian Goodwin into center field and Adam Lind into left field, so Kendrick will provide the club with an option in left as well as some veteran bench depth — and a postseason upgrade over the likes of Raburn and Heisey — once everyone is healthy down the stretch. Kendrick is currently dealing with a bruised left hand after getting hit by a pitch, though clearly Washington isn’t concerned that the injury will have any long-term effects.

Mills, 21, ranked as the Nationals’ 18th-best prospect on the recently released midseason top 30 list of Jim Callis and Jonathan Mayo at MLB.com. He’s pitched to a 3.01 ERA with a ridiculous 118-to-22 K/BB ratio (10.1 K/9, 1.9 BB/9) through 104 2/3 innings for Class-A Hagerstown this season. Callis and Mayo peg him for an above-average fastball and curveball with an average changeup. Their report gives him a back-of-the-rotation ceiling but also noted that some in the Nats organization felt there was more upside than that with Mills.