The Yankees and Twins have agreed to a trade that will send left-hander Jaime Garcia from Minnesota to New York in exchange for Double-A right-hander Zack Littell and Triple-A lefty Dietrich Enns, the Yankees announced on Sunday. 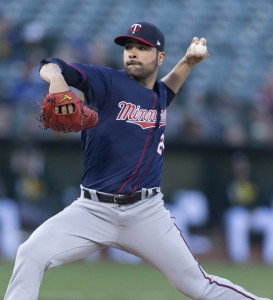 The 31-year-old Garcia will bring some stability to the Yankees rotation, having logged a 4.29 ERA with 6.9 K/9 against 3.3 BB/9 and a 55 percent ground-ball rate between Atlanta and Minnesota this season. He’s worked six or more innings in 15 of his 19 starts this year, which is especially encouraging for a Yankees team that features a deep bullpen — particularly following the trade that netted them both David Robertson and Tommy Kahnle from the White Sox.

Garcia is a free agent at season’s end, making him a pure rental. However, the Yankees reportedly plan to continue their talks with the A’s regarding a longer-term rotation piece, Sonny Gray, even after completing the Garcia trade. Whether those talks come to fruition remains to be seen, but Garcia alone is a nice step up for a Yankees rotation that recently lost Michael Pineda to Tommy John surgery. The veteran Garcia, who comes with a solid postseason track record and a World Series ring (2011 Cardinals) will join Luis Severino, CC Sabathia, Masahiro Tanaka and Jordan Montgomery in the starting five.

Garcia’s stint with the Twins lasted less than a week. Minnesota’s declining play and lengthy winning streaks for the Royals and Indians have created a seven-game gap for the Twins in the American League Central, which is steep enough for the front office to sell off some short-term assets. The Twins, though, agreed to pay the remainder of Garcia’s $12MM salary when acquiring him from the Braves in exchange for right-hander Huascar Ynoa, and they’ll reportedly pay that figure down to the pro-rated league minimum for the Yankees.

Minnesota will remain on the hook for about $4MM in this trade, which effectively amounts to buying a pair of prospects that the Twins clearly feel to be superior to the player they initially surrendered to acquire Garcia. Littell ranks 22nd among Yankees prospects on MLB.com’s midseason top 30 list. (By comparison, Ynoa ranked 22nd in a weaker Twins farm system.)

Littell, 21, was the Mariners’ 11th-round pick back in the 2013 draft and landed in the Yankees organization as part of last November’s James Pazos trade. After a strong 2016 campaign split between two Class-A levels, he’s taken another step forward in 2017. In a combined 115 1/3 innings between Class-A Advanced and Double-A, he’s worked to a 1.87 ERA with 8.5 K/9, 1.8 BB/9 and a 52 percent ground-ball rate. MLB.com’s Jim Callis and Jonathan Mayo write that Littell has three average or better offerings with above-average control.

The 26-year-old Enns isn’t considered to be one of the Yankees’ best prospects, but he has an excellent track record of results in his minor league career. The Central Michigan University product has never posted an ERA higher than 2.94 in a full season, and he’s worked to a 1.99 ERA with 9.3 K/9 against 2.0 BB/9 in 45 1/3 innings between Triple-A and a Rookie-level injury rehab start this year. Enns is on the 40-man roster, though he was just added this past offseason, so he has two more option years remaining beyond the 2017 campaign.

Yahoo’s Jeff Passan first broke news that the two sides were moving toward a deal. MLB.com’s Jon Morosi first mentioned that Littell could be involved in the deal. ESPN’s Buster Olney tweeted that talks were at the “1-yard lins.” FanRag’s Jon Heyman tweeted that there was an agreement. Joel Sherman of the New York Post reported that Enns was also in the deal (Twitter link). Darren Wolfson of 1500 ESPN and MLB.com’s Mark Feinsand added details on the financial component (Twitter links).