The Blue Jays have acquired right-hander Tom Koehler and cash considerations from the Marlins for minor league righty Osman Gutierrez, according to announcements from both teams. Gutierrez will report to Single-A Greensboro with his new organization. 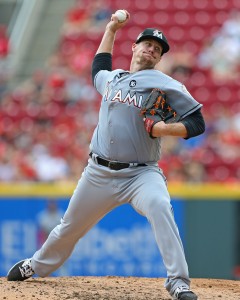 Whether Koehler will immediately head to Toronto or Triple-A Buffalo is unclear. Regardless, he’ll provide some depth to a 59-64 Jays club that’s 3.5 games out of a wild-card spot and currently has a couple question marks in its rotation behind the proven trio of Marco Estrada, Marcus Stroman and J.A. Happ. One of those question marks, Chris Rowley, has gotten good results over a pair of starts, while the long-struggling Nick Tepesch has turned in subpar work over three appearances from the rotation since Toronto acquired him from the Twins in late July.

Gutierrez, 22, was not among the Blue Jays’ top 30 prospects at MLB.com before the trade, though the 2011 international signing from Nicaragua was 26th on Baseball America’s list for the team after last season. BA noted at the time (subscription required and recommended) that Gutierrez features a 94-96 mph fastball that can top out at 97 mph, a “generally above-average” slider and a somewhat promising changeup. Gutierrez hasn’t fared well at the Single-A level this year, though, with a 7.88 ERA, 8.25 K/9 against 6.25 BB/9 and a 38.6 grounder rate through 72 innings.