The Dodgers will promote top outfield prospect Alex Verdugo to make his Major League debut, tweets J.P. Hoornstra of the Southern California News Group. The 21-year-old will need to be added to the 40-man roster, though the Dodgers could create space for that move simply by moving lefty Grant Dayton to the 60-day DL. (Dayton had Tommy John surgery recently.) 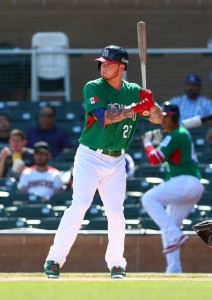 Notably, Bill Plunkett of the Orange County Register tweets that Joc Pederson will not immediately be called up when rosters expand tomorrow. Pederson, unlike Verdugo, will remain in Triple-A for the time being — likely until the minor league season comes to a close, according to Plunkett.

Verdugo is batting .314/.389/.436 with six homers and nine steals through 495 plate appearances in Triple-A Oklahoma City this season. He’s currently ranked as the game’s No. 22 prospect, per Eric Longenhagen of Fangraphs. Jim Callis and Jonathan Mayo of MLB.com rated him 28th on their summer top 100, while Baseball America pegged him 35th.

The free report from Callis and Mayo praises the former second-round pick as an “extremely advanced hitter for his age,” noting that contact comes so easily for Verdugo that some wonder if it will cut into his walk rate. Verdugo uses the opposite field well and has average speed with the instincts to handle center field, the MLB.com duo adds.

Verdugo’s name has been oft-mentioned in trade rumors over the past year, though never in the sense that the Dodgers were shopping him or even willing to move him. To the contrary, teams such as the Twins, Tigers, Rangers and Orioles have all reportedly eyed Verdugo when marketing established veterans to the Dodgers, but president of baseball operations Andrew Friedman and his staff have steadfastly refused to make Verdugo available in talks.

Given the timing of his promotion, the earliest that Verdugo could qualify for arbitration would be upon completion of the 2020 season. He’s controllable through at least the 2023 season for the Dodgers, though those timelines could both be delayed if the team ultimately decides that Verdugo requires further minor league refinement and gives him some more work at Triple-A in 2018.