The Yankees announced on Thursday that after a decade as the team’s manager, Joe Girardi will not return for an 11th season in 2018. Girardi’s four-year contract (worth a reported total of $16MM) expired at the end of the 2017 season. 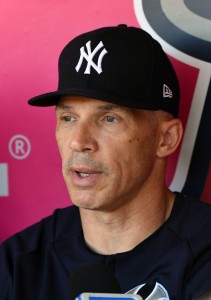 Girardi himself tells WFAN’s Sweeny Murti that he did not decide to step down, but that the Yankees made the decision not to retain him (Twitter link): “With a heavy heart, I come to you because the Yankees have decided not to bring me back.”

There have been rumblings for the past couple of weeks that Girardi’s future with the Yankees was uncertain. Ken Rosenthal wrote for The Athletic yesterday (subscription required) that some Yankees officials had gotten the sense that Girardi was “spent” and “ready to move on.” Rosenthal also noted, though, that there was some degree of tension between the Yankees and Girardi. ESPN’s Buster Olney, in fact, tweets that general manager Brian Cashman’s recommendation to owner Hal Steinbrenner was that the Yankees make a change at the manager position.

Cashman offered the following comment in a press release announcing the decision not to retain Girardi:

“I want to thank Joe for his 10 years of hard work and service to this organization. Everything this organization does is done with careful and thorough consideration, and we’ve decided to pursue alternatives for the managerial position. As Hal Steinbrenner and I mentioned to Joe directly this week, he has been a tremendous Yankee on the field and away from it, as a player, coach and manager. He has a tireless work ethic, and put his heart into every game he managed over the last decade. He should take great pride in our accomplishments during his tenure, and I wish Joe and his family nothing but success and happiness in the future.”

Girardi, 53, will walk away from the Yankees with an outstanding 910-710 regular-season record as well as a 28-24 record with the Yankees in the postseason. That playoff record includes a 2009 World Series Championship and this past season’s deep run into Game 7 of the ALCS in what many expected to be a transitional year for the Yanks.

Girardi came under fire following a misstep in Game 2 of the ALCS when he neglected to challenge a hit-by-pitch call on a pitch that, in replay, looked to have struck Indians outfielder Lonnie Chisenhall’s bat rather than his hand, as had been ruled. Chisenhall went to first base, setting the stage for a dramatic Francisco Lindor grand slam.

In the coming days, Girardi owned the mistake, telling the media that he “messed up.” If his accountability wasn’t enough to atone for the decision, however, the Yankees’ play certainly was in the eyes of most fans. Girardi’s Yankees stormed back to win three straight against the Indians, marching to the ALCS and taking the Astros to the brink of elimination in a seven-game series.

Yankees higher-ups, however, seemingly weren’t swayed by the team’s resiliency. Whether the decision ultimately came from the front office or from ownership, Girardi somewhat remarkably becomes the third playoff manager and the sixth overall to be removed from his post in since late September. Two division champion managers, John Farrell (Red Sox) and Dusty Baker (Nationals) have been shown the door by their respective organizations. Additionally, the Phillies (Pete Mackanin) and Mets (Terry Collins) moved their skippers into advisor roles within the front office, while the rebuilding Tigers parted ways with Brad Ausmus.

The managerial seats of both the Nationals and the Phillies remain vacant, creating the possibility that Girardi could enter the mix for either position. Given Girardi’s track record and the level of respect that he has earned throughout the industry, it’d be something of a surprise if either club didn’t reach out to him. As for the Yankees, they’ll embark on their own search for a new skipper in the weeks to come.

David Kaplan of ESPN 1000 first broke the news (on Twitter). FanRag’s Jon Heyman first tweeted that the decision came from the Yankees, not Girardi.