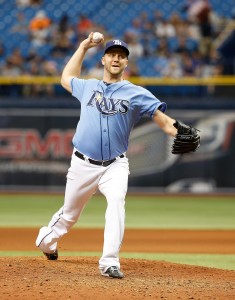 The trade of Boxberger to Arizona sheds one arbitration-eligible player for the Rays, who have a sizable arb class and many decisions to face as they look to trim payroll for the 2018 season. While Boxberger won’t be paid at an exorbitant rate — MLBTR contributor Matt Swartz projects a $1.9MM salary in 2018 — Tampa Bay was facing arb decisions on 12 players, suggesting that further non-tenders or trades of second-tier players could be on the horizon for the Rays.

Boxberger, 30 in May, was an All-Star closer for the Rays back in 2015 when he saved 41 games and pitched to a 3.71 ERA with 10.6 K/9, 4.6 BB/9 and a 36.3 percent ground-ball rate. Arizona’s ninth-inning situation is currently murky after 2017 closer Fernando Rodney hit free agency at season’s end, and while Boxberger could compete for a high-leverage spot depending on the D-backs’ other offseason moves, he won’t simply be handed the job. For one thing, Archie Bradley could well be the in-house favorite to fill that role at present. Furthermore, the bullpen looks like one area for the D-backs to address this offseason, though they’ll face payroll challenges in doing so.

Beyond that, Boxberger hasn’t been closing in Tampa Bay in recent seasons anyhow, as he’s been plagued by groin and oblique injuries as well as a flexor strain in 2017. When healthy, however, he was quite effective this past season, as evidenced by a 3.38 ERA, 12.3 K/9 and 3.4 BB/9 in 29 1/3 frames. Boxberger has totaled just 53 1/3 innings over his past two injury-plagued seasons, though he’ll be a nice addition that the team can control through the 2019 season, via arbitration, if he can remain healthy next year. Boxberger adds to a massive D-backs arbitration class that now includes an astounding 15 players — though the Snakes have several non-tender/trade candidates in that mix themselves (e.g. Chris Herrmann, J.J. Hoover, T.J. McFarland).

Jim Callis and Jonathan Mayo of MLB.com note in their scouting report that the 6’6″ fourth-rounder (2016) has the potential for two plus offerings thanks to a 94-95 mph sinker and an upper-80s slider. Callis and Mayo note that there’s a belief that Taylor could end up in the bullpen ultimately, and Fangraphs’ Eric Longenhagen tweets the same. Per Longenhagen, Taylor has better control than most pitchers of his height and a potential plus slider, but his delivery is better suited for relief work.